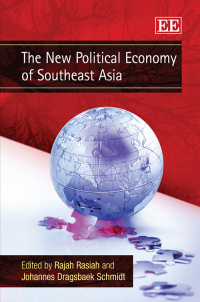 In doing so, it explores the effects of development policy on a number of interdisciplinary issues, and the emergence of new social and political pressures created by industrialization. These include their heightened vulnerability to complex economic crises, their use of sophisticated instruments in the labour process and increased awareness of environmental issues. The distinguished authors present a regional and cross-border focus on transnational actors and institutions, and the policy issues and problems which have a wider impact on spatial configurations in the region.

This insightful study will appeal to researchers, academics and policymakers working on the economics and development of Southeast Asia.
Critical Acclaim
‘The New Political Economy of Southeast Asia is a praiseworthy interdisciplinary scholarly survey of contemporary political economy of one of the most dynamic economic hubs of the world. It is a highly-recommended reading not only for advanced scholars of Asian studies who hope to build upon the theoretically-oriented and empirically-grounded analyses advocated in this volume, but also for students and interested individuals who are deeply interested in Southeast Asia, or more broadly, on the study of regional and national economies vis-à-vis their constitutive property of being globally embedded. Future scholarly endeavors in the social sciences dealing with the study of Southeast Asian political economy are strongly encouraged to build upon the findings uncovered in the volume’s interdisciplinary-oriented analyses, as well as to be more conscious of uncovering the multi-dimensional linkages between the global and regional political economies.’
– Salvador Santino Regilme Jr., CEU Political Science Journal

‘This is a very interesting book. It is topical and is one of the few volumes that attempts to treat Southeast Asia as an integrated whole. The editors are methodologically ambitious, and they skillfully integrate a very large amount of diverse material in their introduction. I imagine that the book would be adopted widely for courses in Asian studies and political economy.’
– Hal Hill, The Australian National University

‘The different parts of the Southeast Asian puzzle fit better together as a consequence of reading this valuable book, which brings history back in to show how regions learn from each other and establish an identity.’
– Alice Amsden, Massachusetts Institute of Technology, US
Contributors
Contributors: A. Chongvilaivan, A. Chowdhury, S.B. Das, C. Dixon, I. Islam, A.P.J. Mol, R. Ofreneo, R. Rasiah, J.D. Schmidt, D.A. Sonnenfeld, P. Wad
Contents
Contents:

Innovative Capabilities and the Globalization of Chinese Firms