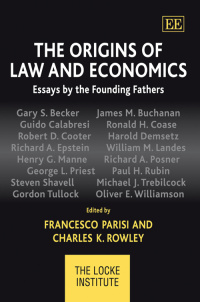 The Origins of Law and Economics

Essays by the Founding Fathers

9781847203205 Edward Elgar Publishing
The Locke Institute series
Edited by Francesco Parisi, Oppenheimer Wolff and Donnelly Professor of Law, University of Minnesota Law School, US and Professor of Economics, University of Bologna, Italy and the late Charles K. Rowley, former General Director, The Locke Institute, Duncan Black Professor of Economics and Director, Program in Economics, Politics and the Law, James M. Buchanan Center for Political Economy, George Mason University, US
Publication Date: 2007 ISBN: 978 1 84720 320 5 Extent: 544 pp
This unique collection of largely unpublished papers brings together the founding fathers of law and economics to provide their own views on the origins and intellectual history of the field. Law and economics emerged as a separate field of scholarship during the early 1960s, fueled by two seminal papers, one by Ronald Coase and one by Guido Calabresi. The ideas generated by scholars researching in the field have deeply influenced the major disciplines of economics and the law.

More Information
Critical Acclaim
Contributors
Contents
More Information
This unique collection of largely unpublished papers brings together the founding fathers of law and economics to provide their own views on the origins and intellectual history of the field. Law and economics emerged as a separate field of scholarship during the early 1960s, fueled by two seminal papers, one by Ronald Coase and one by Guido Calabresi. The ideas generated by scholars researching in the field have deeply influenced the major disciplines of economics and the law.

These 16 essays (including three by Nobel Laureates in Economic Sciences) provide an impressive blend of differing experiences and varying perspectives, reflecting on the intellectual foundations of the field, its early struggles for recognition, and its remarkable advance during the last four decades of the twentieth century, and into the twenty-first. The essays clearly outline, and contribute new insights into, all of the central issues of this still vibrant research programme. A unifying theme of the book is the central importance attached by each scholar to scientific analysis, rather than to any particular ideology or dogma.

‘I recommend this book in the strongest terms to all scholars interested in the history of law and economics. . . for bringing together these essays and for attempting to place the field in historical perspective, the editors deserve our thanks. . . For insider perspectives on the evolution of the field, to get a sense for the different conceptions of what it means to do economics, to do law, and to do law and economics, the book makes for a most interesting read.’
– Steven G. Medema, Review of Austrian Economics

‘Scholars at all stages of their careers will be interested in seeing how the field of law and economics has developed over almost a half century – the topics that were of interest, the methodology used, the ways in which problems were defined, tackled, solved. This is a major contribution to the intellectual history of economics and of law and economics.’
– Donald N. Dewees, History of Political Economy

‘This book of specially commissioned, original papers, by two major
scholars, Francesco Parisi and Charles Rowley, is essentially an
intellectual history of the L&E school. . . This book is one of the many valuable collections Edward Elgar has offered in many fields of economics, most of them being very handy, especially when they gather important contributions otherwise scattered across various reviews and journals, sometimes in obscure volumes. . . On the whole, this book is a valuable contribution to the intellectual history and the methodology of L&E. It gathers some of the most important essays on these questions, and it is a must-read for L&E scholars, legal theorists and economists with broader interests.’
– Aristides N. Hatzis, The Law and Politics Book Review
Contributors
Contributors: G.S. Becker, J.M. Buchanan, G. Calabresi, R.H. Coase, R.D. Cooter, H. Demsetz, R.A. Epstein, E.W. Kitch, W.M. Landes, H.G. Manne, F. Parisi, R.A. Posner, G.L. Priest, C.K. Rowley, P.H. Rubin, S. Shavell, M.J. Trebilcock, G. Tullock, O.E. Williamson
Contents
Contents:

2. Methodological Debates in Law and Economics: The Changing Contours of a Discipline
Francesco Parisi

7. The Relevance of Transaction Costs in the Economic Analysis of Law
Ronald H. Coase

8. The Confluence of Justice and Efficiency in the Economic Analysis of Law
Robert D. Cooter

9. Toward a Theory of Property Rights II: The Competition Between Private and Collective Ownership
Harold Demsetz

10. The Economist in Spite of Himself
Richard A. Epstein

11. The Art of Law and Economics: An Autobiographical Essay
William M. Landes

12. How Law and Economics was Marketed in a Hostile World: A Very Personal History
Henry G. Manne

13. The Law and Economics Movement: From Bentham to Becker
Richard A. Posner

14. The Rise of Law and Economics: A Memoir of the Early Years
George L. Priest

15. Why was the Common Law Efficient?
Paul H. Rubin

16. Law Versus Morality as Regulators of Conduct
Steven Shavell

18. The Case Against the Common Law
Gordon Tullock