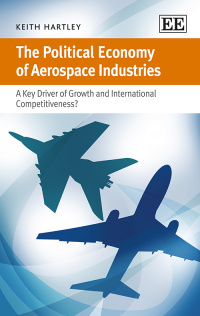 The Political Economy of Aerospace Industries

A Key Driver of Growth and International Competitiveness?

9781782544951 Edward Elgar Publishing
Keith Hartley, Emeritus Professor, Economics Department, University of York, UK
Publication Date: 2015 ISBN: 978 1 78254 495 1 Extent: 288 pp
The Political Economy of Aerospace Industries will appeal to undergraduate and graduate students in industrial and defence economics, public choice and policy courses. It will also be of interest to researchers, policy-makers and those involved in the industry in various different capacities.

More Information
Critical Acclaim
Contents
More Information
Aerospace is often viewed as a key high-technology industry, important for a nation’s future growth prospects and international competitiveness. This book presents an economic and political analysis of the world’s aerospace industries and their performance.

Keith Hartley uses examples from most of the world’s significant aerospace industries, especially across the USA, UK and Europe. The emphasis on political economy reflects the continuing influence of government on the fortunes of the industry. He presents chapters on aerospace markets, technical progress, industry structure, conduct and performance, a case study of BAE Systems, public choice analysis, the case for subsidies, procuring military aircraft, international collaboration, as well as an insight into future prospects. He concludes that the future aerospace firm will be radically different, but governments will continue to dominate the industry.

The Political Economy of Aerospace Industries will appeal to undergraduate and graduate students in industrial and defence economics, public choice and policy courses. It will also be of interest to researchers, policy-makers and those involved in the industry in various different capacities.

Critical Acclaim
‘Every so often an academic book comes along which is not only powerfully analytical and deeply informative but also encapsulates the author’s lifetime research interests. Authored by one of the UK’s most eminent economists, Keith Hartley’s latest book on the aerospace industry offers the reader an authoritative and fascinating insight in to a global industry of immense economic and strategic importance. This book will be essential reading for academic scholars, government policy-makers and aerospace industry practitioners alike.’
– Derek Braddon, UWE, Bristol, UK

‘This is an important book about an important industry. Aerospace is a highly political and politicised industry that has often seemed immune to normal commercial practices;. Professor Hartley has turned powerful set of economic tools on the sector and calls into question some of the facile arguments that have often been used to justify government support for some economically dubious projects. He is especially forthright on the problematic area of military aerospace collaboration in Europe.’
– Keith Hayward, Head of Research, Royal Aeronautical Society, UK

‘This is the definitive book on the political economy of the aerospace industry by the world’s leading scholar on the subject. This is a must read for anyone studying defence economics or who is interested in the aerospace industry. It is clear, concise, and informative.’
– Todd Sandler, University of Texas at Dallas, US