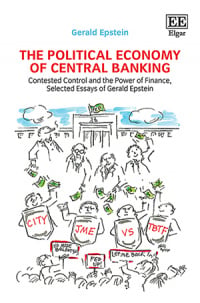 The Political Economy of Central Banking

Contested Control and the Power of Finance, Selected Essays of Gerald Epstein

9781788978408 Edward Elgar Publishing
Gerald Epstein, Professor of Economics and Co-Director, Political Economy Research Institute (PERI), University of Massachusetts-Amherst, US
Publication Date: 2019 ISBN: 978 1 78897 840 8 Extent: 576 pp
Central banks are among the most powerful government economic institutions in the world. This volume explores the economic and political contours of the struggle for influence over the policies of central banks such as the Federal Reserve, and the implications of this struggle for economic performance and the distribution of wealth and power in society.

More Information
Critical Acclaim
Contents
More Information
Central banks are among the most powerful government economic institutions in the world. This volume explores the economic and political contours of the struggle for influence over the policies of central banks such as the Federal Reserve, and the implications of this struggle for economic performance and the distribution of wealth and power in society.

Written over several decades by Gerald Epstein and co-authors, these works explore why central banks do what they do, and how they could better operate. Epstein shows that central banks are a contested terrain over which major economic and political groups fight for control; and demonstrates that though in the US and most other countries, private bankers have the upper-hand in this political struggle, they don’t always win.

Graduate students, faculty and advanced undergraduates in economics, political science and sociology who are interested in central banking and finance as well as specialists who focus on central banking will find greater understanding of central banks through The Political Economy of Central Banking.

Critical Acclaim
‘This book promises to be an invaluable addition to postgraduate and advanced undergraduate reading lists on economics degrees. Providing remarkable historical detail on four decades of finance led growth, it also necessitates critical engagement with politics embedded in technical economic governance. If, as Epstein suggests, the fundamental contemporary policy challenge is to confront the climate emergency, then this collection alerts future economists to the institutionalized empowerment of monopolist holders of carbon assets within the economic system.’
– John H Morris and Paula Bejarano Carbó, Economic Issues

‘Monetary policy is not just a matter of optimal stabilization policy; it is also fundamentally a matter of politics. But while this observation is commonplace, it is not adequately incorporated into economists' reasoning and analysis. Gerald Epstein's work represents perhaps the most prominent exception to this last rule. Reading him provides a salutary reminder that we need to pay closer attention to this political aspect when thinking about central banks and what they do.’
– Barry Eichengreen, University of California, Berkeley, US

‘For decades Jerry Epstein has been shattering myths around central banking and forcing us to think differently about this institution. This invaluable collection brings together his path breaking work on the subject. A careful reading of the book makes it impossible to sustain the argument that central banks stand above politics and that they have served the public good through a single minded focus on inflation. The book arrives at precisely the right time, i.e., when we desperately need new ideas about how to remake our economic institutions so that they work for all.’
– Ilene Grabel, University of Denver, US and author of When things don’t fall apart: Global Financial Governance and Developmental Finance in an Age of Productive Incoherence

‘Central Bankers, and the Federal Reserve in particular, has been portrayed as a group of technocrats working to serve in the public interest. Through insightful analytical and empirical analyses, Jerry Epstein shows that in reality the Fed can act like a Wizard of Oz. Epstein’s hard work pulls back the curtain for us all to see how Central Banking really works, and proposes concrete reform regarding how it can be the engine of an economy that promotes stability, growth and prosperity.’
– Kevin P. Gallagher, Boston University, US

‘Professor Gerald Epstein has been a pioneer in extending political and class conflict considerations to the analysis of central banks and monetary policy. With regard to macroeconomics, he was one of the first to introduce the critical distinction between industrial and financial capital. With regard to monetary policy, he has been a leader in framing central banking as a politically contested space. That frame makes a mockery of mainstream claims that central banks can be politically neutral. Instead, they are riddled with the preferences and beliefs of those in control. This collection of his papers is both a tribute to Professor Epstein and an essential reference.’
– Thomas Palley, independent economist
Contents
Contents:

5 ‘The Federal Reserve–Treasury Accord and the Construction of the Postwar Monetary Regime in the United States’, with Juliet B. Schor, Social Concept , 7 (1), July, 1995, 7–48

9 ‘Macropolicy in the Rise and Fall of the Golden Age’, with Juliet B. Schor, in Stephen A. Marglin and Juliet B. Schor (eds), The Golden Age of Capitalism: Reinterpreting the Postwar Experience , Chapter 3, Oxford, UK: Clarendon Press, 1990, 126–52, references

20 ‘The Impact of Quantitative Easing on Income Inequality in the United States’, November, 2018