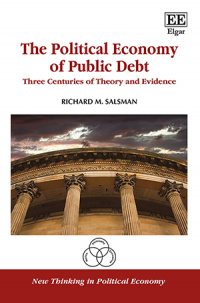 The Political Economy of Public Debt

Three Centuries of Theory and Evidence

9781785363375 Edward Elgar Publishing
New Thinking in Political Economy series
Richard M. Salsman, Assistant Professor, Program in Philosophy, Politics & Economics, Department of Political Science, Duke University, US
Publication Date: 2017 ISBN: 978 1 78536 337 5 Extent: 336 pp
How have the most influential political economists of the past three centuries theorized about sovereign borrowing and shaped its now widespread use? That important question receives a comprehensive answer in this original work, featuring careful textual analysis and illuminating exhibits of public debt empirics since 1700. Beyond its value as a definitive, authoritative history of thought on public debt, this book rehabilitates and reintroduces a realist perspective into a contemporary debate now heavily dominated by pessimists and optimists alike.

More Information
Critical Acclaim
Contents
More Information
How have the most influential political economists of the past three centuries theorized about sovereign borrowing and shaped its now widespread use? This important question receives a comprehensive answer in this original work, featuring careful textual analysis and illuminating exhibits of public debt empirics since 1700. Beyond its value as a definitive, authoritative history of thought on public debt, this book rehabilitates and reintroduces a realist perspective into a contemporary debate now heavily dominated by pessimists and optimists alike.

The book simultaneously explicates and critiques the most prominent theories concerning why states borrow in the first place, whether or not they borrow productively, the incidence of their debts, why they sometimes borrow too much and why they often default, whether explicitly or implicitly. The author classifies major public debt theorists as pessimists, optimists or realists. This book also examines the influence of regime types, especially why most modern welfare states tend not only to over-issue bonds but also to incur even larger implicit obligations via unfunded, off-balance sheet liabilities.

Scholars and undergraduate and graduate students in economics and political science, as well as policymakers, will find this analysis of public debt and public spending insightful and revealing.

Critical Acclaim
‘The Political Economy of Public Debt is a work of extraordinary historical sweep that looks beneath the surface; it does neither describe, nor prescribe, but explains.. . .The book’s in-depth analysis of the causes and evolution of public debt over 300 years provides a fuller understanding of intergenerational, intragenerational, economic and political effects of public debt.. . . In this far-reaching and insightful book, Salsman has provided an important and timely analysis of public debt. Its mix of history, economics, and political science will be of appeal to anyone wishing to understand the historical context from which public debt evolved. With painstaking accuracy Salsman’s lucid analysis helps us to understand why public debt, which had been created to finance wars until World War II, still remains a financing mode in peacetime for the virtually unbridled power of democracies.’
– Giuseppe Eusepi, The Review of Austrian Economics

‘The book is a substantial achievement insofar as the author covers a very large intellectual territory, in considerable detail, and grounded in primary sources.’
– Tony Aspromourgos, History of Political Economy

‘The Political Economy of Public Debt is an insightful treatment of all the major theories and controversies regarding public debt since the 1700s. The author, moreover, is no axe grinder; to the contrary, he presents a fair and balanced narrative that will prove informative to all interested readers.’
– Richard Wagner, George Mason University, US

‘Salsman provides a very insightful integration of the history of public debt and the primary theories regarding the consequences of governmental debt. His discussion of economic laws and political science raise a clear issue about the relationship of unrestricted democracy and unrestricted public debt. This book is an important contribution to understanding an issue that will have significant impact on the future of western civilization. Well worth reading.’
– John Allison, Retired Chairman and CEO of BB&T and Retired President and CEO of Cato Institute, US

‘Richard Salsman presents a powerful indictment of the world’s delusions about public debt. His arguments are so lucid and evidence so clear that even politicians and journalists can follow them with much profit.’
– Steve H. Hanke, Johns Hopkins University, US

‘Dr. Salsman’s book is an intellectual laser beam that offers clarity and precision in an important but neglected area of political and economic thought: public debt theory. The book’s title indicates the ambitious scope of the project, and the result matches the ambition. The book is engagingly written and structured in a concise, intuitive manner that traces the development of public debt theory from its earliest Classical era to the more recent Keynesian and Public Choice schools of thought. One thing in particular that makes Salsman’s discussion accessible and enjoyable to read is that he quotes writers at length, which enables readers to form their own conclusions about the ideas under discussion, rather than relying solely on Salsman’s assessments. This not only provides greater clarity; it also unearths some surprises. . . Salsman’s book is aimed at a scholarly audience, and its review of public debt theory over the past three centuries is comprehensive (as the thirty-eight pages of references at the end of the book attest). In this capacity, it is a tremendous resource for anyone interested in scholarly questions relating to the sustainability and political economy of public debt, or the history of political economic thought. But the book is accessible to anyone with a midlevel understanding of economics. And any reader who wants to understand the history of public debt and our debt-laden future will find himself indebted to Salsman for this book.’
– The Objective Standard

‘The Political Economy of Public Debt is an excellent review of different conceptions of public debt in economic theories. It divides history of economic ideas into three main families: classical theories, Keynesian theories and public choice. . .The book is an excellent work, quite useful for researchers in both public finance, political economy and history of economic thought.’
– History of Economic Thought and Policy