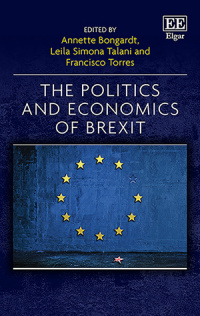 The Politics and Economics of Brexit

More Information
Critical Acclaim
Contributors
Contents
More Information
This interdisciplinary book examines Brexit from a political economy perspective, enriched by insights from scholars of political science, history and law. Shedding light on the key motivations for Brexit, this incisive book seeks to better understand what shapes the UK’s political and economic preferences and the fundamental causes and issues that have moulded its stance on the EU.

Political issues explored include the political rationality of Brexit and the reasons for the UK’s unsustainable position in the EU, specific UK sovereignty concerns in the absence of a written constitution, the issue of preferences, and the UK’s prospective standing in the world post EU exit. Economic considerations such as the root causes of Brexit, examination of the properties of the single market and EU regulation, including the issue of the City of London, and the importance played by subjective wellbeing rather than economic growth are investigated, as well as the challenges to be confronted post-Brexit.

The Politics and Economics of Brexit will be a key resource for scholars and students interested in the European Union, European governance and political economics. Analysing the Brexit impasse from 2016-2019, this comprehensive book will also be valuable to those working in comparative politics, international relations, business and industry.

Critical Acclaim
‘Brexit has many dimensions: political, social, economic, financial and legal. That’s what makes the exit of Britain from the EU so difficult to organize. And because it is so difficult, it will continue to make it exciting to study. This timely book disentangles all the different dimensions of Brexit and lays them bare for everybody to see. A must read.’
– Paul De Grauwe, London School of Economics, UK

‘This is a timely and comprehensive book that furthers our understanding of the causes and consequences of Brexit not only for the UK but also for the EU and the rest of the world. The authors succeed in addressing the debates over Brexit from an historical, political, economic and legal point of view. Their comprehensive and insightful analyses of the underlying and proximate causes of Brexit represent an important contribution to the academic literature that is also accessible to the general public.’
– Alan Cafruny, Hamilton College, US
Contributors
Contributors: S. Baroncelli, A. Bongardt, R. Bourgeot, P. Della Posta, R. Di Quirico, E. Diodato, S. Giusti , S. Rehman, M. Rosini, L.S. Talani, F. Torres

PART 1: THE POLITICS OF BREXIT
Chapter 2: Brexit as a question of political rationality: hard choices for the UK, lessons for EU sustainability
Annette Bongardt and Francisco Torres

Chapter 3: The road to Brexit: European integration, the UK and the failure of the “malign neglect” strategy toward the EU
Roberto di Quirico

Chapter 7: UK dithering over Brexit: on the European single market and its regulatory model
Annette Bongardt

Chapter 8: Brexit and the future of the City of London: Between deregulation and innovation
Leila Simona Talani