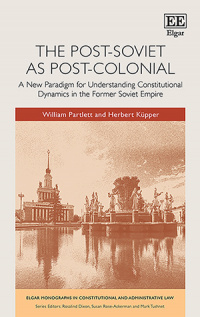 9781802209433 Edward Elgar Publishing
Elgar Monographs in Constitutional and Administrative Law
William Partlett, Associate Professor of Law, Melbourne Law School, University of Melbourne, Australia and Herbert Küpper, Managing Director, Institute for East European Law, Research Centre for Eastern and South Eastern Europe, Regensburg, Germany
Publication Date: 2022 ISBN: 978 1 80220 943 3 Extent: 288 pp
This book describes the collapse of the Soviet Union as a moment of decolonization and the post-1991 constitution-building experience as a postcolonial one. Partlett and Küpper’s application of the post-colonial paradigm to the former Soviet world adds new facets to post-colonial constitutional theory by presenting a third type of (ideology-based) colonialism and a third type of decolonization.

This post-colonial paradigm provides a new set of tools for understanding constitutional dynamics in key countries within the European Union as well as the former Soviet republics to the East. In particular, it helps explain democratic backsliding in Central Europe (such as Hungary and Poland), authoritarian resilience in many of the former Soviet republics (including Russia, Belarus, and Kazakhstan) as well as ongoing struggles about national identity in places like Ukraine and Moldova.

Partlett and Küpper’s application of the post-colonial paradigm to the former Soviet world contributes to our understanding of post-colonial constitutionalism. This insightful book therefore appeals to the comparative constitutional academic community as well as the broader academic community interested in post-colonialism. It will also be of interest to a general audience interested in better understanding the former socialist bloc countries.

Critical Acclaim
‘This daring book reconceptualises post-Soviet transitions as exercises in post-colonial constitution-making. The result of this reframing is a wealth of insight, including a deepened understanding of the understudied polities that were formerly part of the USSR and fresh perspectives on the authoritarian turn taken in some parts of Eastern Europe.’
­– David Landau, Florida State University, College of Law, US
Contents
Contents: Preface Introduction: understanding East European and Eurasian constitutions through the post-colonial lens 1. Post-colonialism and post-socialist constitutional change 2. Russian constitution-making: convergence or continued exceptionalism in the former imperial centre? 3. An unexpected independence: the constitutions of the states of the ‘inner empire’ 4. Case studies from the inner empire 5. Factual decolonisation: the constitutions of the states of the ‘outer empire’ 6. Case study from the outer empire Conclusions: the shadows of the past and the overlaps between
the post-authoritarian and the post-colonial Bibliography Index
Add to Wish List
eBook for individuals
978 1 80220 944 0
From $40.00
Click here for options
eBook for library purchase
978 1 80220 944 0
View sample chapter and check access on: