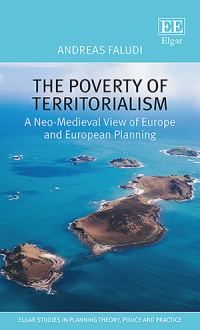 The Poverty of Territorialism

A Neo-Medieval View of Europe and European Planning

9781800371040 Edward Elgar Publishing
Elgar Studies in Planning Theory, Policy and Practice
Andreas Faludi, Professor Emeritus and guest researcher, Delft University of Technology, the Netherlands
Publication Date: 2020 ISBN: 978 1 80037 104 0 Extent: 200 pp
Drawing on territorial ideas prevalent in the Medieval period, Andreas Faludi offers readers ways to rethink the current debates surrounding territorialism in the EU. Challenging contemporary European spatial planning, the author examines the ways in which it puts the democratic control of state territories and their development in question. The notion of democracy in an increasingly interconnected world is a key issue in the EU, and as such this book advocates a Europe where national borders are questioned, and ultimately transgressed.

Challenging contemporary European spatial planning, this book explores how modern planning puts the democratic control of state territories and their development in question. The notion of democracy in an increasingly interconnected world is a key issue, and as such Faludi advocates a Europe where national borders are questioned, and ultimately transgressed.

Progressive and timely, this book is an invaluable read for academic and practicing planners concerned with European planning and co-operation. Critical social and political geographers will also benefit from the revolutionary insights Faludi offers.
Critical Acclaim
‘This book is highly recommended for the readers of the professional community of social and political sciences, European studies, border studies, sociology and for those amateur readers who are interested in issues of territory, sovereignty, territorialism, neo-medievalism, state, borders and the European Union.’
– Teodor Gyelnik, Cross-Border Review

‘A unique and fascinating read – it is not often the case that one feels the urge to read an academic book from cover to cover. . . . I hope that many will read and discuss this fascinating book, and by doing so further the debate on territoriality and new ways of understanding, planning and governing space.’
– Regional Studies

‘Few individuals have made a more seminal contribution to contemporary planning theory than Andreas Faludi. His latest book, The Poverty of Territorialism: A Neo-Medieval View of Europe and European Planning, provides a synthesis of his ground-breaking empirical and theoretical work on the politics of planning and territorial governance in the European Union.’
– Jonathan Metzger, Planning Theory

‘European spatial planning and governing without territoriality is as yet a bridge too far even as cross it we must, as Faludi believes. This farsighted book takes us to the gate.’
– Michael Neuman, European Planning Studies

‘This book is a breathtaking read, full of smart anecdotes and unexpected real-life examples that greatly illustrate the author’s thinking, rich with historical parallels and universal parabolas. . . I would like to convince those who care about the future of our continent to read Faludi’s book, as a truly great source of inspiration and fresh thinking on the spatial domain.’
– Jacek Zaucha, Institute of Geography and Spatial Organization

‘Andreas Faludi’s book is original and inspiring. In his enquiry about “territorialism”, he develops a concrete pedagogy of the irrelevance of national borders. Andreas, a leading expert in the field of spatial planning, modestly claims to stick to planning as his legitimate field, but has sufficient knowledge to think out of the box, and look at the big picture. Andreas is one of those rare people with the sufficient vision and systemic approach required to plan an interdependent world.’
– Jean Peyrony, Mission opérationnelle transfrontalière, France

‘In his latest book, Andreas Faludi engagingly interweaves an academic discussion on territorialism and its challenges for spatial planning with his personal reflections on the history and possible future of the EU integration project.’
– Stefanie Dühr, University of South Australia

‘In The Poverty of Territorialism Andreas Faludi challenges key concepts that the spatial planning community has come to love. Faludi’s thoughts offer highly valuable inspiration to all those dealing with the future of regions, the nation state or even the European Union. Cutting edge planning literature!’
– Jörg Knieling, HafenCity University Hamburg, Germany
Contributors