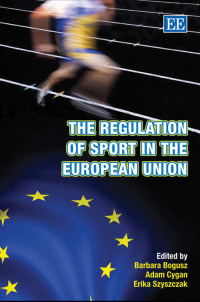 The Regulation of Sport in the European Union

9781847203632 Edward Elgar Publishing
Edited by Barbara Bogusz, Adam Cygan, University of Leicester, UK and Erika Szyszczak, University of Sussex, UK
Publication Date: 2007 ISBN: 978 1 84720 363 2 Extent: 256 pp
The Regulation of Sport in the European Union brings together a collection of essays which examine the regulatory and institutional implications which the ‘Europeanisation’ of sporting activity has brought about in the last decade. Uniquely, in addressing these issues the book adopts an inter-disciplinary approach, involving law, economics and sociology and brings together several key themes which arise from the question of whether sport is unique. The book addresses the growing argument that sporting activity and its commercial exploitation displays special properties which requires a distinct regulatory framework and governance structure that EC law and national legislation do not provide.

More Information
Critical Acclaim
Contributors
Contents
More Information
The purpose of this book is to examine, from an EU perspective, the numerous developments which have taken place in the regulation of sporting activity in the last decade.

Uniquely, in addressing these developments, the book adopts an inter-disciplinary approach, involving law, economics and sociology. The chapters place the regulation of sport in the context of the EU regulatory structure which hitherto has emerged in a piece-meal fashion and thus warrants a more holistic approach. The chapters bring together several key themes which arise from the question of whether sport is special? This addresses a growing argument that sporting activity displays unique properties which require a distinct form of regulation that existing competition or free movement rules cannot provide. The book is divided into three parts which reflect the current policy, legislative and judicial discourses that exists in the regulation of sport.

The Regulation of Sport in the European Union provides both an academic and practical review of EU law and policy as applied to sport, and as such, this comprehensive overview will be of great interest to EU law academics, economists and political scientists. It will also appeal to legal practitioners and to those with an interest in regulatory processes in the EU.
Critical Acclaim
‘Globalization not only means fans watching distant contests and leagues exporting their products elsewhere; it also means the ability of knowledgeable academics and policy-oriented fans to learn about how others confront similar challenges. North Americans who realize on reflection that the way we do things is not necessarily “natural” or “the only way” will enjoy and profit from the insightful comparative essays in this book. The so-called “European Model of Sport” is quite different than our own. There are significant parallels between the European effort to distinguish sport and commerce and our own efforts in regard to big-time collegiate sports. The unusual (for North American fans of typical sports leagues) issues with regard to auto racing are quite instructive. A truly horizon-expanding work.’
– Stephen F. Ross, Penn State Institute for Sports Law, Policy and Research, US

PART I: THE REGULATION OF ECONOMIC ACTIVITY IN SPORT
1. Is Sport Special?
Erika Szyszczak

3. On Overlapping Legal Orders: What is the ‘Purely Sporting’ Rule?
Stephen Weatherill

4. Competition and Free Movement Issues in the Regulation of Formula One Motor Racing
Adam Cygan

6. The Regulation of Sport in the European Union: Courts and Markets
Luca Barani

9. Fame and its Exploitation: The Legal Protection of Celebrity in the United Kingdom
Jennifer Davis