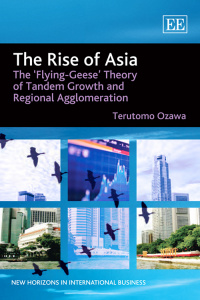 The Rise of Asia

The ‘Flying-Geese’ Theory of Tandem Growth and Regional Agglomeration

The author explores an array of concepts – from the ladder of economic development and hegemon-led growth clustering, through ‘stages jumbling’, to comparative advantage recycling and the Ricardo-Hicksian limits of industrialism – which together help bring an understanding of the dynamics of tandem growth and regional agglomeration in Asia. The book also investigates the causal mechanisms of structural upgrading and emphasizes the critical role of multinational corporations. Throughout this wide-reaching analysis, Terutomo Ozawa advocates a ‘flying-geese’ way of thinking—that is, to think of Asia’s phenomenal growth in hierarchical, dialectical, and evolutionary terms.

In a new era of rapid globalization and rising economic nationalism, this timely and insightful book will appeal strongly to scholars and students of international business, economics, political science, and international relations. Those specializing on Asia will find it of particular value.
Critical Acclaim
‘Ozawa is, in many ways, a political-economy pioneer. . . Ozawa shows his vast understanding of the topic by deconstructing each stage of economic development into small, more precise problems. . . Ozawa’s vast economic, historical and philosophical knowledge shines through in this book. . . brings a much needed multi-faceted perspective to the subject of economic development. It is written as clearly as economic theory can be, and although it is clearly intended for an academic (political-economy) readership, it is a useful book for the general public as well.’
– Adelina Bulak, Central European Journal of International and Security Studies

‘… Ozawa’s new book, The Rise of Asia, is a blast of fresh air. . . Turning from the production or real economy to the financial or money economy. . . Ozawa [also] proposes an innovative stages theory of the balance of payments, linked to the stages of the production economy. . . The book, moreover, not only analyzes big trends and big policy issues but does so in remarkably lucid and graceful prose, accessible to undergraduates and the general reader.’
– Robert H. Wade, London School of Economics, Winner of the 2008 Leontief Prize in Economics, reviewed in Asia Policy

‘Ozawa again breaks new ground in reformulating the flying-geese theory. . . This thought-provoking book is a must read, together with the previous one, for anyone who adopts the FG frame of reference for understanding of – and research on – the topic of economic development in an age of ever-deepening integration.’
– From the foreword by Kiyoshi Kojima
Contents
Contents: Foreword Preface Part I: Agenda 1. Is the Flying-Geese Theory Passé – or Still Relevant? Part II: Real-Sector Growth: Industrial Upgrading 2. Akamatsu’s Flying-Geese Theory – in the Rough 3. A Dynamic Stages Model of Structural Upgrading, Industrial Transplantation, and Knowledge Diffusion 4. Comparative Advantage Recycling in Labor-Driven Growth: An Unprecedented Opportunity for the Poor to Rise? 5. Structural Upgrading, Infrastructure Development, and Insatiable Quest for Natural Resources 6. The Asian Model for Latin America? A Tale of Two Regions Part III: Money/Finance Dimension 7. Borrowed Growth: Balance of Payments, Capital Flows, and Development Finance 8. Creating the World in America’s Own Image? Bibliography Index
Add to Wish List