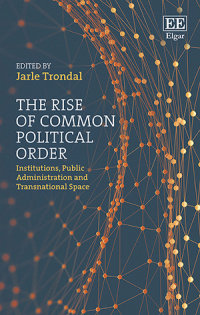 The Rise of Common Political Order

9781786434999 Edward Elgar Publishing
Edited by Jarle Trondal, Professor of Political Science, Department of Political Science and Management, University of Agder and University of Oslo, ARENA Centre for European Studies, Norway
Publication Date: 2017 ISBN: 978 1 78643 499 9 Extent: 296 pp
The Rise of Common Political Order brings together leading research focusing on the conditions for the formation of common political order in Europe. The book aims to define common political order in conceptual terms, to study instances of order formation at different levels of governance and ultimately to comprehend how they profoundly challenge inherent political orders.

The book’s objectives are twofold: first, to explain institutional birth and growth, and second, and most importantly, to assess key effects of order formation. To what extent, and under which conditions, does common political order transform pre-existing political orders? In sum, the book discusses how we can assess theoretically and empirically the rise, stagnation and retrenchment of common political order in Europe. The authors expertly tackle these questions with empirical illustrations of emergent political orders at international, inter-regional and local levels.

The Rise of Common Political Order will have great appeal to political scientists, public administration scholars and international relations scholars based in the EU, US and beyond.
Critical Acclaim
‘Sometimes when I read edited volumes, I start thinking: have these contributors ever spent a day in the same room, discussing what brings them together and ultimately gives the reader the image of a genuine collective project? I am delighted to see that this collection on the conditions for the emergence of common political order in Europe is entirely coherent, compelling, and delivered in very attractive ways. Jarle Trondal has assembled a world team of researchers at the University of Agder in Kristiansand – This is the product of an integrated group of researchers that shares a vision and a progressive research agenda. The book tackles very big questions that define institutional and organizational analysis: how do common institutions emerge, develop and possibly decline or retrench? And what are the effects of multi-level, variable institutional orders in Europe? The volume is strong on explanation and empirically rich, taking us on a journey via the European public administration, the effects of institutions for accountability like the European Parliament and the European Ombudsman, and the many recombinant forms of regional and municipal cooperation in Europe, cutting across borders and national institutions. There will be huge interest for this volume across public administration, international relations, comparative regionalism, European integration, and institutional analysis.’
– Claudio M. Radaelli, University of Exeter, UK

‘This volume makes a highly inspiring and innovative contribution to the analysis of the formation and growth of common political orders in Europe, systematically combining conceptual advancement with rich empirical studies of order formation at different levels of governance.’
– Christoph Knill, University of Munich, Germany

4. The Rise of Independent Supranational Administration: The case of the European Union administration
Jarle Trondal

5. The Rise of International Accountability Institutions: The case of the European Parliament and the European Ombudsman
Jarle Trondal, Anchrit Wille and Anne Elizabeth Stie

7. Experimentalist Governance in a Multi-level Environment: The EU’s macro-regional strategies for the Baltic Sea and Danube regions
Stefan Gänzle and Jörg Mirtl

11. Service Quality, Inter-municipal Cooperation and the Optimum Scale of Operation: The case of local fire departments in Norway
Sara Blåka

12. Breakdown of Inter-Organizational Cooperation: The case of regional councils in Norway
Barbara Zyzak