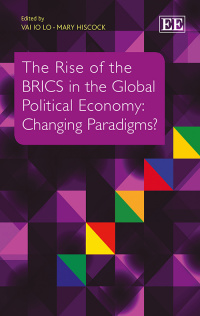 The Rise of the BRICS in the Global Political Economy

9781782545460 Edward Elgar Publishing
Edited by Vai Io Lo, Professor of Law, Bond University, Australia and Mary Hiscock, Emeritus Professor of Law, Bond University, Australia
Publication Date: 2014 ISBN: 978 1 78254 546 0 Extent: 352 pp
Taking an interdisciplinary approach, Vai Io Lo and Mary Hiscock, together with scholars and researchers from around the world, investigate the rise of the BRICS and assess the extent of their further development and influence from the perspectives of economics, international relations and law.

More Information
Critical Acclaim
Contributors
Contents
More Information
Taking an interdisciplinary approach, Vai Io Lo and Mary Hiscock, together with scholars and researchers from around the world, investigate the rise of the BRICS and assess the extent of their further development and influence from the perspectives of economics, international relations and law.

Brazil, Russia, India, and China are expected to become the world’s most influential economies, surpassing the current richest economies, by the middle of the 21st century. With the inclusion of South Africa in 2010, the BRICS span across four continents, creating an abundance of geopolitical clout, in addition to their potential economic dominance. This book examines the economic developments of individual BRICS countries, the current politico-economic condition of the BRICS vis-à-vis non-BRICS countries or groups, and the potential of the BRICS to bring about changing paradigms in the global political economy.

This book is an essential resource for academics, researchers and students who are interested in the rise, development and impact of the BRICS economies. It will also be of interest to economists, political scientists, and specialists in international trade and investment.
Critical Acclaim
'Lo and Hiscock provide the reader with the opportunity to look at the BRICS in a much broader way. Bringing together scholars of international relations, law and economics, this book reminds us that the economic success of the BRICS depends not only on economic growth and trade, but also the future relations with the developed world and domestic reforms. '
– Tevfik Murat Tildirim, European Political Science

2. How Solid are the BRICS? An Economic Overview
Anthony J. Makin and Rashmi Arora

5. Brazil: A Soft Power Rising with the BRICS Towards a Multipolar World
Raquel Dos Santos

7. Joining the BRICs – the Case of South Africa
Laurence Boulle and Jessie Chella

8. Implications of the Rise of the BRIC Countries for Africa
Emmanuel T. Laryea

10. The Power of the BRICS in the World Trade and Growth, Analysing the Macroeconomic Impacts Within and Across
Ahmed Khalid

12. The BRICS – Model for the Earth Living
Dilyara B. Karimova

13. The BRICS and Russia
Stephen Fortescue

17. The Role of the BRICS in International Law in a Multipolar World
Muthucumaraswamy Sornarajah