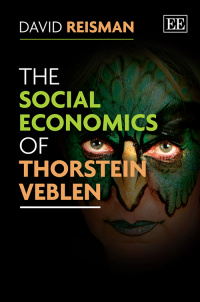 The Social Economics of Thorstein Veblen

9780857932181 Edward Elgar Publishing
David Reisman, Professor Emeritus of Economics, University of Surrey, UK and Senior Associate, Centre for Liberal Arts and Social Sciences, Nanyang Technological University, Singapore
Publication Date: July 2012 ISBN: 978 0 85793 218 1 Extent: 352 pp
Thorstein Veblen was a multidisciplinary social scientist whose original insights continue to inspire debate. Rather than focusing on allocation, markets and scarcity, his perspective on economics was rather one of Darwinian evolution and perpetual development, unfolding conventions and interpersonal constraints. This interdisciplinary and comprehensive book determines that Veblen’s disparate theories of conspicuous consumption, imperial Germany, the giant corporation and the speculation-led cycle all add up to a consistent and coherent world-view.

More Information
Critical Acclaim
Contents
More Information
Thorstein Veblen was a multidisciplinary social scientist whose original insights continue to inspire debate. Rather than focusing on allocation, markets and scarcity, his perspective on economics was rather one of Darwinian evolution and perpetual development, unfolding conventions and interpersonal constraints. This interdisciplinary and comprehensive book determines that Veblen’s disparate theories of conspicuous consumption, imperial Germany, the giant corporation and the speculation-led cycle all add up to a consistent and coherent world-view.

Veblen was a fascinating author who deserves to be read for himself. This penetrating new interpretation demonstrates that he also identified a serious threat to property and peace in the form of irresponsible finance and frustrated workmanship. He believed corporate capitalism was at risk from its internal contradictions. This lucid book assesses the logic behind Veblen’s stark and apocalyptic vision.

The Social Economics of Thorstein Veblen examines all of Veblen’s books and articles, revealing that they are closely integrated to form an organic whole. It will prove valuable for scholars and students interested in sociological theory, politics and political economy, history and institutional economics.
Critical Acclaim
‘Reisman has constructed a coherent structure out of Veblen's thought.’
– Citizens Income

‘Fascination with the economics of Thorstein Veblen is today no less than it was fifty years ago. Many books have been written about his life and ideas. But David Reisman breaks new ground by providing one of the best and most comprehensive explainations of Veblen’s thought. Written in a strikingly fresh and lucid style, this work is one of the landmarks of the literature on this great and enduringly relevant economist.’
– Geoffrey M. Hodgson, University of Hertfordshire, UK

‘Considering the inability of conventional economics to comprehend the socio-economic convulsions over the past few years in so many countries, it is surely time to try something else. David Reisman’s The Social Economics of Thorstein Veblen thus appears at a most opportune moment. This original analytical study is the best introduction into Veblen's work that I know of, and will, I trust, encourage a renewal of interest in possibly the most unjustly neglected of economists. Reisman’s primary contention that there is – despite obstacles to comprehension created by Veblen’s personal idiosyncrasies and unconventional literary style – a Veblen structure of thought, or general system, is fully confirmed by the evidence presented in his book. In this demonstration lies its great merit.’
– Samuel Hollander, Ben-Gurion University of the Negev, Israel

‘Veblen is a notoriously difficult economist to read and understand. He was, however, unequivocal in his scorn for neoclassical economics, whose demise he took pleasure in predicting. In light of the limp excuses offered by the economics profession for its failure to anticipate the current global financial crisis, Reisman’s incisive analysis of Veblen’s writings suggests that were Veblen alive today, he would be revelling in schadenfreude. This timely book will make uncomfortable reading for neoclassical economists.’
– Douglas Mair, Heriot-Watt University, UK

‘Reisman offers a brilliant distillation of Veblen’s jaundiced purview of the social, psychological and pecuniary motivations that have driven man the social animal in his economic life down the ages, from noble savage to predatory barbarian in his ancient, modern, and potential guises. Avoiding hagiography, this book exposes Veblen’s exaggerations as well as his compelling institutional insights into the evolution of capitalism and socialism. Reisman’s own intellectual sweep in explaining and criticising Veblen demonstrate political economy at its best.’
– Roger Sandilands, University of Strathclyde, UK
Contents
Contents: 1. Introduction 2. Institutional Economics 3. Instincts and Endowments 4. Savages and Barbarians 5. Cumulative Causation 6. Consumption 7. Production 8. The Profit Motive 9. Corporation and Credit 10. The Age of Irrelevance 11. Socialism: The Intelligentsia and the Proletariat 12. Socialism: The Engineers 13. The Reversion to War 14. Perpetual Peace 15. Neoclassical Economics 16. Who Was Thorstein Veblen? References Index
Add to Wish List