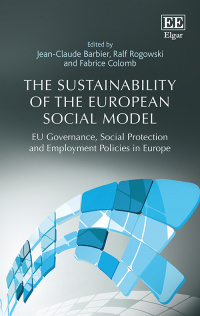 The Sustainability of the European Social Model

More Information
Critical Acclaim
Contributors
Contents
More Information
Highly valued by its citizens, the European social model is a defining feature of Europe and the European Union yet is under threat from the effects of both globalisation and the aftermath of the financial crisis. The Sustainability of the European Social Model addresses this issue in light of the current crisis that changed the landscape. It examines how social Europe responds to uncertainties that affect its development from a range of different disciplinary perspectives.

The book begins by analysing interactions between EU law and national policies from a comparative perspective, highlighting the legal, social and institutional complexities that constrain the development of ‘social Europe’ It assesses the sustainablibity of EU law and policies in the areas of pensions and employment policy and then focuses on two crucial areas of EU social policy: the regulations on working time and the provisions of social services of general interest. The expert contributors compare the experiences of a range of Member States (and also bring in external comparison) to explore topics such as ageing, job quality, social protection and employment policies, social dialogue and the relationship between the various methods of European policymaking such as the 'community method' and the Open Method of Co-ordination. The analyses show that sustainability of the European social model will depend heavily on addressing failings in European governance.

Insightful and comprehensive, this book is a detailed and timely resource for academic researchers. Its practical, policy-oriented insights into important issues in social and employment policy, as well as into European policymaking itself, will also be of great interest to practitioners and policymakers.

Critical Acclaim
‘The response of European Union institutions to the Eurocrisis demonstrated their fragile and failing commitment to the role of social policy in advancing European economies and societies. The present volume, exploring the positive scope for such policies, is therefore timely and welcome. While sharply critical of much of what goes on at both EU and several national levels, the authors are constructive in tone and point the way to sustainable alternatives to neoliberalism.’
– Colin Crouch, University of Warwick, UK and Max Planck Institute for the Study of Societies, Germany

‘In summary, this collective research has the merit of giving the reader a broad vision of the state of EU influence on specific aspects of social law and redistributive policies. The usefulness of the book is increased by a complete Table of Cases and a well-structured Index. This book is undoubtedly valuable for academics and lawyers interested in the evolution of EU social and economic integration.’
– Common Market Law Review

PART 1 EU LAW AND GOVERNANCE OF SOCIAL AND EMPLOYMENT POLICIES
1. The Janus Face of EU Law - A Sociological Perspective on European Law Making and its Influence on Social Policy in the EU
Jean-Claude Barbier and Fabrice Colomb

5. In Search of a European Employment Strategy: The Construction of the ‘Job Quality’ Agenda as an Illustrative Case
Christine Erhel, Jérôme Gautié and Bernard Gazier

PART II THE REGULATION OF WORKING TIME IN EUROPE
6. Sustainability and Uncertainty in Governing European Employment Law - The Community Method as Instrument of Governance: The Case of the EU Working Time Directive
Ralf Rogowski

8. The Unexpected Consequences of the Application of the EU Working Time Directive in France
Fabrice Colomb

10. Implementation of the EU Working Time Directive in the United Kingdom
Ralf Rogowski

13. The Impact of EU Regulation on Social Services of General Interest in the United Kingdom
Aristea Koukiadaki

15. Social Services of General Interest in France: The Uncertain Impact of the Increasing Reach of EU Law
Jean-Claude Barbier