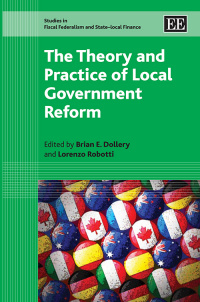 The Theory and Practice of Local Government Reform

More Information
Critical Acclaim
Contributors
Contents
More Information
The Theory and Practice of Local Government Reform explores the entire spectrum of local government reform and focuses specifically on the question of structural reform in local government. It presents new theoretical models in an area largely lacking in analytical foundations and assesses the validity of these models against recent structural developments.

Changes to local government are some of the most heartfelt and hotly contested political issues in advanced democracies today. The authors draw on recent policy developments in seven countries, as well as academic literature, to present new thinking on optimal municipal governance in the face of future policy challenges. This timely book will be invaluable for both undergraduate and graduate local government students in political science, public administration and public policy courses. Practitioners and policymakers in local government will also find this book an enlightening read.
Critical Acclaim
‘This book substantially advances our knowledge of structural reform in local government. By combining new theoretical insight with policy developments in seven different developed countries, the book not only tests conceptual models against real-world experience in local government structural reform, but it also offers fresh perspectives on the most promising types of structural reform. Written by leading scholars from seven different countries, this book will become a standard work in the area of local government reform.’
– Andrew Worthington, Griffith University, Australia

‘Structural reform has been one of the most important, and yet one of the most neglected, aspects of modern local government. This book represents the first attempt, since the early seventies, at providing a comprehensive account of both the theory and practice of structural reform in local government in developed countries. Using recent policy experience from seven different countries, the authors present seminal theoretical perspectives on structural reforms in local governance and the policy implications deriving from them. Written by well-known scholars of local government from around the world, this volume is a “must-read” for all academics, practitioners, students and policymakers.’
– Giorgio Brosio, University of Turin, Italy

PART I: THE THEORY OF LOCAL GOVERNMENT REFORM
2. Local Government and the Economics of Federalism
Brian Dollery and Lorenzo Robotti