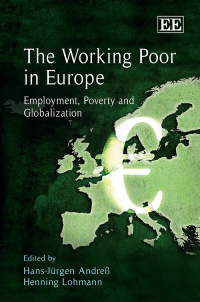 The Working Poor in Europe

9781847207982 Edward Elgar Publishing
Edited by Hans-Jürgen Andreß, Professor of Social and Economic Research, University of Cologne, Germany and Henning Lohmann, University of Hamburg, Germany
Publication Date: 2008 ISBN: 978 1 84720 798 2 Extent: 336 pp
For a long time in-work poverty was not associated with European welfare states. Recently, the topic has gained relevance as welfare state retrenchment and international competition in globalized economies has put increasing pressures on individuals and families. This book provides explanations as to why in-work poverty is high in certain countries and low in others.

More Information
Critical Acclaim
Contributors
Contents
More Information
For a long time in-work poverty was not associated with European welfare states. Recently, the topic has gained relevance as welfare state retrenchment and international competition in globalized economies has put increasing pressures on individuals and families. This book provides explanations as to why in-work poverty is high in certain countries and low in others.

Much of the present concern about the working poor has to do with recent changes in labour market policies in Europe. However, this book is not primarily about low pay. Instead, it questions whether gainful employment is sufficient to earn a living – both for oneself and for one’s family members. There are, however, great differences between European countries. This book argues that the incidence and structure of the working poor cannot be understood without a thorough understanding of each country’s institutional context. This includes the system of wage-setting, the level of decommodification provided by the social security system and the structure of families and households. Combining cross-country studies with in-depth analyses from a national perspective, the book reveals that in-work poverty in Europe is a diverse, multi-faceted phenomenon occurring in equally diverse institutional, economic and socio-demographic settings.

With its rich detail and conclusions, this genuinely comparative study will be of interest to academics and researchers of labour and welfare economics, social policy and European studies as well as to policy advisers.
Critical Acclaim
‘The book provides important findings on the link between institutions and in-work poverty. The volume makes a significant contribution to this strand of literature as evidence on cross-country differences is scarce. The combination of case studies and comparative quantitative investigations is an interesting approach.’
– Annekatrin Niebuhr, Papers in Regional Science

‘This data-rich book explores the causes of in-work poverty in Europe. . . The balanced provision of theoretical insights and strong empirical support will prove useful to poverty scholars and policymakers alike.’
– Contemporary Sociology

‘A book on in-work poverty could not be timelier. . . At a time when many of the working poor are likely to become the non-working poor this book is a must-read.’
– Zoë Irving, Journal of Social Policy

‘This volume represents a valuable contribution to debates on welfare states, public policy, poverty and social exclusion. It is an empirically rich and analytically robust comparative collection, highlighting the variations between and contradictions of in-work poverty across Europe.’
– Patricia Kennett, University of Bristol, UK

4. The Different Roles of Low-wage Work in Germany: Regional, Demographical and Temporal Variances in the Poverty Risk of Low-paid Workers
Marco Gießelmann and Henning Lohmann

5. The Silent Transformation of the Dutch Welfare State and the Rise of In-Work Poverty
Erik Snel, Jan de Boom and Godfried Engbersen

7. “Much Ado About Nothing?” Institutional Framework and Empirical Findings on the Working Poor Phenomenon in Finland from 1995 to 2005
Ilpo Airio, Susan Kuivalainen and Mikko Niemelä

8. Two Countries in One: The Working Poor in Italy
Ferruccio Biolcati-Rinaldi and Federico Podestà

9. Is Work a Route Out of Poverty: What Have New Labour’s Welfare-to-Work Measures Meant for the Working Poor in Britain?
Sara Connolly

12. Explaining In-Work Poverty Within and Across Countries
Henning Lohmann and Hans-Jürgen Andreß