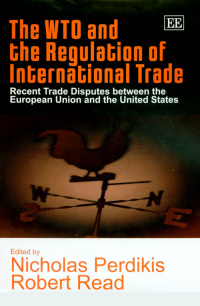 The WTO and the Regulation of International Trade

Recent Trade Disputes between the European Union and the United States

More Information
Critical Acclaim
Contributors
Contents
More Information
This book provides a critical overview and assessment of the WTO’s dispute settlement procedures in the context of several recent trade-related disputes between the EU and the US.

Case studies provide comprehensive insights into the contemporary regulation of international trade and workings of the WTO. Topics covered include:

• a critique of the GATT, WTO and NAFTA dispute settlement mechanisms
• agriculture in the light of Doha
• the CAP, beef hormones and GM food
• the banana dispute, the steel dispute and foreign trade corporations
• process and production method (PPM) issues and cases.