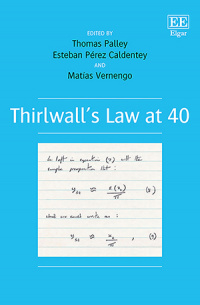 More Information
Contents
More Information
2019 marked the 40th anniversary of the publication of Anthony P. Thirlwall’s classic paper that laid out what became known as Thirlwall’s law. This article introduced and provided empirical evidence in favor of the proposition that the long-run rate of growth of an economy compatible with balance-of-payments equilibrium can be approximated by the simple rule of the ratio of the growth of exports to the income elasticity of demand for imports.

Thirlwall’s law provides a theoretical underpinning for several of the arguments traditionally espoused by the heterodox followers of Keynes. In addition, Thirlwall’s law can also be viewed as a guide to policy-making. It has spurred a rich research agenda at both the theoretical and empirical levels. Theoretically the core model has been extended to include the different components of the current account of the balance of payments. Empirically, it has withstood the test of time and has been corroborated, with perhaps a few exceptions, for a variety of developed and developing countries under different historical contexts and different periods of time.

This re-release of the special issue of the Review of Keynesian Economics brings together experts and researchers to present the latest developments and debates on Thirlwall’s law. Students, economists and policy makers will find this volume enlightening.
Contents
Contents:

Why Thirlwall’s law is not a tautology: more on the debate over the law 3
J.S.L. McCombie

Thirlwall’s law and the terms of trade: a parsimonious extension of the
balance-of-payments-constrained growth model 37
Esteban Pérez Caldentey and Juan Carlos Moreno-Brid