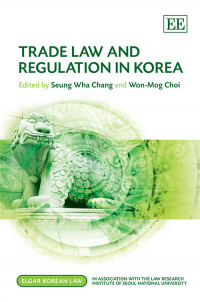 Trade Law and Regulation in Korea

Beginning with an introduction to the trading regime in Korea, and an overview of the basic trade laws and regulations, the expert contributors move on to cover specific topics in detail. They examine import/export measures (such as customs, rules on country of origin, import procedures, and export controls on strategic items) as well as trade remedies and trade in services. In addition, the book assesses the impact of competition laws on trade and concludes by considering the issues of foreign investment and FTAs.

5. Laws on Trade in Services in Korea
Joon-Gi Kim

7. Increasing Interaction Between Investment and Trade in Korea
Jaemin Lee