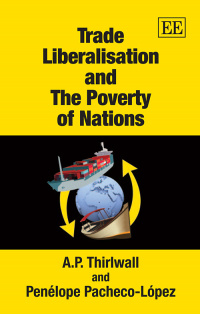 Trade Liberalisation and The Poverty of Nations

9781847208224 Edward Elgar Publishing
A.P. Thirlwall, Professor of Applied Economics, University of Kent, Canterbury, UK and Penélope Pacheco-López, Economic Consultant
Publication Date: 2008 ISBN: 978 1 84720 822 4 Extent: 264 pp
This book argues that orthodox theory is based on many unreal assumptions, and that there are sound economic arguments for selective protection of industrial activities in the early stages of economic development. The historical evidence of the now-developed countries also illustrates this fact.

More Information
Critical Acclaim
Contents
More Information
Orthodox trade and growth theory, and the world’s multilateral development institutions, extol the virtues of trade liberalisation and free trade for more rapid economic development of poor countries. However, the contemporary reality and history seem to tell a different story. The world economy has experienced an unprecedented period of trade liberalisation in the last thirty years, and yet international and global inequality is widening; domestic poverty (outside of China) is increasing; poor countries’ exports have grown more slowly than their imports leading to balance of payments crises, and the so-called globalising economies of the world (excluding China and India) have fared no better, and in some cases worse, than those countries that have not liberalised so extensively. This book argues that orthodox theory is based on many unreal assumptions, and that there are sound economic arguments for selective protection of industrial activities in the early stages of economic development. The historical evidence of the now-developed countries also illustrates this fact.

With supporting empirical evidence, this book provides a powerful theoretical critique of orthodox trade theory. It will be of great interest to students taking courses in international trade and development economics, as well as to professional economists and policymakers in international development institutions.
Critical Acclaim
‘This is a meticulously researched and well written book on a subject of immense contemporary academic and policy interest.’
– Prema-chandra Athukorala, Journal of Development Studies

‘The book is a valuable contribution to the analysis of the links between trade liberalisation, poverty and inequality . . . The book is a coherent piece of work offering an abundance of well-researched and argued information, effectively establishing it as a notable contribution to the investigation and understanding of this very important field. Therefore this book is highly recommended as an important publication for everyone interested in this field as it is a powerful guide to the complex questions that emerge when dealing with the issues of trade liberalisation and poverty elimination at international level.’
– Marios Koutsias, International Trade Law and Regulation

‘Thirlwall and Pacheco-López’s book makes its contribution by serving as a clearly written synthesis of a diversity of literatures on trade liberalization and its impacts on growth, inequality and wages, and poverty. . . . the book is an excellent one. It should be a required reading companion to any graduate-level trade course.’
– Kevin P. Gallagher, Journal of Human Development and Capabilities

‘This book breaks out of the standard distinction between “free trade” and “protectionism”, and shows how to think constructively about trade policy as an instrument of national economic strategy. It is highly recommended for those who wish to think beyond orthodoxy, and especially for those in developing countries who wish to influence negotiations with developed countries and western-based international organisations.’
– Robert Wade, London School of Economics, UK

‘This is a gem of a book. Based on deep understanding of diverse economic theories and empirical evidence, it offers us a succinct but highly informative overview of the controversies surrounding the impact of trade policy on growth, inequality, and macroeconomics.’
– Ha-Joon Chang, University of Cambridge, UK, and author of Kicking Away the Ladder, and Bad Samaritans

‘Free-trade fundamentalism is gradually making way for a more nuanced and historically well-informed understanding of the role that trade policy plays in economic development. Thirlwall and Pacheco-López provide an excellent review of the relevant literature as well as a sophisticated critique of the earlier, simplistic views. As they explain, it is the details – the timing, sequencing, and context – that determine whether liberalization will succeed.’
– Dani Rodrik, Harvard University, US

‘This book will infuriate the free trade ultras who believe that liberalisation is the answer to every problem – and a good thing too. The real world, as Thirlwall and Pacheco-López show clearly and vividly, is different from the world of theoretical models so beloved by today’s economic orthodoxy, and they take delight in tweaking the noses of the Washington consensus. History suggests they are right to argue that managed trade is better for developing countries than swallowing large doses of free-trade medicine.’
– Larry Elliott, The Guardian
Contents
Contents: Preface 1. The Theory and Measurement of Trade Liberalisation 2. Trade Liberalisation, Trade Performance and Economic Growth 3. Trade Liberalisation and International Inequality 4. Trade Liberalisation, Poverty and Domestic Inequality 5. Trade Strategy and Economic Development Bibliography Index
Add to Wish List
eBook for individuals
978 1 84844 401 0
From $42.40
Click here for options
eBook for library purchase
978 1 84844 401 0
View sample chapter and check access on: