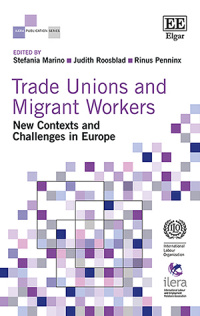 New Contexts and Challenges in Europe

9781788114073 Edward Elgar Publishing
ILERA Publication series
Edited by Stefania Marino, Work and Equalities Institute, The University of Manchester, UK, Judith Roosblad, Inspectorate of Social Affairs and Employment and Rinus Penninx, Institute for Migration and Ethnic Studies, University of Amsterdam, the Netherlands
Publication Date: 2017 ISBN: 978 1 78811 407 3 Extent: 424 pp
This timely book analyses the relationship between trade unions, immigration and migrant workers across eleven European countries in the period between the 1990s and 2015. It constitutes an extensive update of a previous comparative analysis – published by Rinus Penninx and Judith Roosblad in 2000 – that has become an important reference in the field. The book offers an overview of how trade unions manage issues of inclusion and solidarity in the current economic and political context, characterized by increasing challenges for labour organizations and rising hostility towards migrants.

More Information
Critical Acclaim
Contributors
Contents
More Information
This timely book analyses the relationship between trade unions, immigration and migrant workers across eleven European countries in the period between the 1990s and 2015. It constitutes an extensive update of a previous comparative analysis – published by Rinus Penninx and Judith Roosblad in 2000 – that has become an important reference in the field. The book offers an overview of how trade unions manage issues of inclusion and solidarity in the current economic and political context, characterized by increasing challenges for labour organizations and rising hostility towards migrants.

The qualitative analysis of trade union strategies towards immigration and migrant workers is based on a common analytical framework centred on the idea of ‘dilemmas’ that trade unions have to face when dealing with immigration and migrant workers. This approach facilitates comparative analysis and distinguishes patterns of union policies and actions across three groups of countries, identifying some explanations for observed similarities and differences. In addition, the book also includes theoretical chapters by expert scholars from a range of disciplinary fields including industrial relations, migration studies and political economy.

This comprehensive comparative analysis is an essential resource for academics across a range of disciplines as well as policy-makers, practitioners and organizations involved in trade unions and migrant inclusion and integration.

Critical Acclaim
‘A significant contribution to the literature, it provides a wealth of reference material for scholars or practitioners interested in European trade unions or specific European labour markets, a clear and relevant framework for analysis, and valuable longitudinal and geographical comparative analysis.’
– Clara Turner, etui

‘This timely book offers not only richly textured studies of European trade union responses to the influx of immigrant workers across the continent, but also an insightful comparative analysis. Building on an earlier volume that the editors published at the turn of the 21st century, this one focuses on the new challenges posed by growing economic globalization, trade union decline and the surge of xenophobia among European workers. It deserves a prominent spot on the bookshelf of anyone interested in labor movements and migration, not only in Europe but worldwide.’
– Ruth Milkman, The Graduate Center, City University of New York, US

‘Trade Unions and Migrant Workers updates the classic "three-dilemmas" thesis of Penninx and Roosblad, demonstrating its continuing relevance in today's shifting migration context. Drawing on national case studies of union responses to labour migration, it shows that while the balance of power and incentive structures unions face have shifted, the fundamental strategic dilemmas posed to unions by labour migration remain the same. This book will be a go-to citation for me in the coming years.’
– Nathan Lillie, University of Jyväskylä, Finland

'The labour market integration of migrant workers and of workers with a migration background is an increasingly sensitive puzzle for employment services, employers and especially politicians across Europe. In this puzzle, trade unions have an enormous role, which is too often neglected and which varies across countries, issues and time. This book by an impressive team of experts provides a long needed systematic and sympathetic analysis and will be the central reference for both research and policy debates for years to come.'
– Guglielmo Meardi, University of Warwick, UK

‘In recent years, immigration has posed major political and economic challenges for western societies. Whether and how to integrate or restrict immigrant workers is a burning question for politicians and activists across the spectrum. Of particular importance are the attitudes of trade unions – organizations well situated either to exclude or to craft strategies of inclusion. In this fine book, experienced researchers offer a comprehensive study of contrasting union approaches across eleven European countries. Findings are informative, surprising, and couldn’t be more timely.’
– Lowell Turner, Cornell University, US

‘This work provides a relevant comparative and detailed description of how the early slogan “Proletarians of all countries, unite!” (Karl Marx, 1848) has been put into practice in Europe in the 21st century. This presented a huge challenge for the (re)construction of worker solidarity and the organized defence of social rights. This book sheds important light on how further European social construction could progress.’
– Albert Martens, KU Leuven, Belgium

Part I Changing contextual conditions for trade union action
2. Economic and labour market change and policies: Before and beyond austerity in Europe
Jason Heyes and Thomas Hastings

3. Migration and its regulation in an integrating Europe
Rinus Penninx

4. Migrants in the public discourse: Between media, policy and public opinion
Alberta Giorgi and Tommaso Vitale

10. Sweden: A model in dissolution?
Anders Neergaard and Charles Woolfson

11. Trade unions and migrant workers in the UK: Organising in a cold climate
Heather Connolly and Ben Sellers

14. Trade unions and immigration in Spain: The politics and framing of social inclusion within industrial relations
Miguel Martínez Lucio

16. Trade unions and migrant workers in Poland: First stage of a work in progress
Julia Kubisa