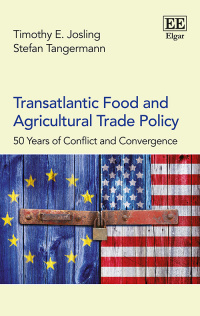 50 Years of Conflict and Convergence

9781783476954 Edward Elgar Publishing
The late Tim Josling, formerly Professor Emeritus in the Food Research Institute and Senior Fellow, Stanford Institute for International Studies, Stanford University, US and Stefan Tangermann, University of Göttingen, Germany
Publication Date: 2015 ISBN: 978 1 78347 695 4 Extent: 320 pp
Transatlantic Food and Agricultural Trade Policy traces the past fifty years of transatlantic trade relations in the area of food and agricultural policy, from early skirmishes over chicken exports to ongoing conflicts over biotech foods and hormone use in animal rearing. The current talks on a free-trade area between the US and the EU (TTIP) bring all these differences to the negotiating table. The book points to possible solutions to these decades-old problems.

The authors take an analytical approach to the causes of transatlantic conflict and the extent to which these trade tensions in agricultural markets have reflected wide differences in policy approaches and levels of support. They explore the role played by international rules, in the GATT, and subsequently the WTO, in disciplining farm price support policies to allow for more open markets. The book also points to possible ways to end five decades of transatlantic trade tensions in the area of food and farm products.

Scholars, practitioners and policymakers will find this timely book an invaluable and comprehensive guide to the causes of, and solutions to, the persistent EU-US trade conflicts in agricultural and food policy.

Critical Acclaim
‘Overall, the book is fascinating reading. The wealth of knowledge of the authors and their thoughtful scholarship are demonstrated through a clear and relatively impartial analysis of the history of the trading relationship between two of the world's foremost economic and political powers and the complex issues that have characterized that history. This book is essential reading for anyone who wants to understand how EU–US agricultural trade relations have evolved and the challenges that both currently face in trying to conclude a wide-ranging bilateral agreement on trade and investment.’
– David Blandford, American Journal of Agricultural Economics

‘This is an invaluable piece of work that, to my knowledge, is not replicated anywhere, even in piecemeal fashion. It should be read by everyone having a stake in the Transatlantic Trade and Investment Partnership (TTIP) negotiations. It fills an historical vacuum in US–EU agricultural trade relationships that has existed for decades. This book provides the context of the past half century, and it will be invaluable for another half century.’
– Clayton Yeutter, Former US Trade Representative, Former US Secretary of Agriculture and Senior Advisor at Hogan Lovells, US

‘Two of the world’s brightest academic and economic minds convene and draw a precise picture of how US-EU trade relations in food and agriculture developed in the last 50 years. Timothy E. Josling and Stefan Tangermann take you behind the scenes of intense transatlantic negotiations and show you who pulls the strings on both sides of the Atlantic. The book is a must read for all who want to better understand the workings of current transatlantic negotiations and future global regulations related to food policy.’
– Franz Fischler, President of the European Forum Alpbach and former EU Commissioner for Agriculture and Fisheries

‘Josling and Tangermann, foremost experts in their field, provide an historical look at EU–US agricultural and food policy and the current Transatlantic Trade and Investment Partnership (TTIP) negotiations. An invaluable explanation of 50 years of conflict and convergence that provides timely insights into the possible reconciliation of EU and US policy post-TTIP.’
– Pascal Lamy, Former Director-General of the WTO
Contributors