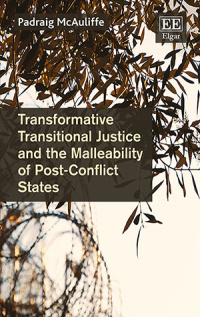 Transformative Transitional Justice and the Malleability of Post-Conflict States

9781783470037 Edward Elgar Publishing
Padraig McAuliffe, Senior Lecturer, School of Law and Social Justice, University of Liverpool, UK
Publication Date: 2017 ISBN: 978 1 78347 003 7 Extent: 368 pp
Despite the growing focus on issues of socio-economic transformation in contemporary transitional justice, the path dependencies imposed by the political economy of war-to-peace transitions and the limitations imposed by weak statehood are seldom considered. This book explores transitional justice’s prospects for seeking economic justice and reform of structures of poverty in the specific context of post-conflict states.

More Information
Critical Acclaim
Contents
More Information
Despite the growing focus on issues of socio-economic transformation in contemporary transitional justice, the path dependencies imposed by the political economy of war-to-peace transitions and the limitations imposed by weak statehood are seldom considered. This book explores transitional justice’s prospects for seeking economic justice and reform of structures of poverty in the specific context of post-conflict states.

Systematic and timely, this book examines how the evolution of contemporary civil war, the modalities of peacemaking and peacebuilding, as well as the role of grassroots forms of justice, condition prospects for tackling the economic roots of conflict. It argues that discourse in the area focuses too much on the liberal commitments of interveners to the exclusion of understanding how interventionist impulses are compromised by the agency of local actors. Ultimately, the book illustrates that for transitional justice to become effective in transforming structures of injustice, it needs to acknowledge the salience of domestic political incentives and accumulation patterns.

Transitional justice scholars will find this book indispensable as the first consideration of transitional justice and economic transformation from the perspective of the domestic political economy. Both peacebuilding and development specialists will also benefit from its wealth of lessons to be learned.
Critical Acclaim
‘The rhetoric of transformation in transitional justice seems to be everywhere. Padraig McAuliffe takes this agenda down to its roots and exposes unproven or wishful assumptions that fail to connect with conditions in actual post-conflict settings. This bracing and powerful book, massively researched and tightly argued, throws down a gauntlet and defines an agenda for future research. McAuliffe’s book is a singular and outstanding intervention in the transitional justice field.’
– Margaret Urban Walker, Marquette University, US

‘“Economic transformation” has become the order of the day in contemporary transitional justice discourse. The question of how deep-seated economic injustice can be effectively addressed in real-world post-conflict scenarios is rarely considered, however. McAuliffe’s inspiring book tackles this much-neglected issue head-on. It is one of those rare books that “advance the conversation”, a must-read for everyone wishing to go beyond oversimplified formulas and to critically think about the real place of economic justice in post-conflict states.’
– Frank Haldemann, Geneva Academy of International Humanitarian Law and Human Rights, Switzerland

‘Padraig McAuliffe's book has both the ambition to go beyond traditional debates surrounding transitional justice and propose an innovative understanding of transformative justice and the humility to understand the limits of holistic solutions that often do not cater for the specific features of particular situations. It guides the reader away from certain intellectual dead ends, and opens new avenues for fruitful discussion on how to deal with post conflict situations in a way that addresses not only the immediate reasons for conflict but also the underlying structural causes. Padraig McAuliffe takes us on this path with a clear, pedagogic and well written book which will be essential reading for all those trying to understand what is at stake when trying to achieve lasting peace in post-conflict countries.’
– Dov Jacobs, Leiden University, the Netherlands

‘This is one of the most important and original contributions to recent transitional justice literature. In this outstanding work of non-ideal theory, McAuliffe argues that wishful thinking and good intentions are not enough to bring about lasting economic improvements in post war states. What is required is a clear-eyed examination of how transitional justice precepts about economic justice work in particular post war contexts; how they can be realized given the real world institutional weakness, lingering old-guard influence, lack of political tradition and corruption typical of fledgling states. Beautifully written and argued, this is a must read for both scholars and practitioners of transitional justice.’
– Nir Eisikovits, Suffolk University, US
Contents
Contents: Preface 1. Introduction: Acknowledging the Complexities of Post-Conflict Socio-Economic Justice 2. Transitional Justice’s Transformative Turn: How We Got Here, What We Know and What We Don’t 3. Transitional Opportunity? How Peace Negotiations and Power-sharing Impede Root Cause Approaches 4. Transitional Justice, Liberal Peacebuilding and the Endogenous Determinants of Transformation 5. ‘Trickle-up Justice?’: The Impact of Bottom-Up Justice Beyond the Local 6. Conclusion: Lesson’s Learned, Lessons Spurned Index