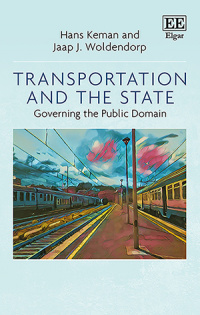 9781788112949 Edward Elgar Publishing
Hans Keman, Professor Emeritus of Political Science and Jaap J. Woldendorp, Formerly Associate Professor, Vrije Universiteit Amsterdam, the Netherlands
Publication Date: 2020 ISBN: 978 1 78811 294 9 Extent: 288 pp
This book analyses the role of the national state, as organiser of its territory and governor of its infrastructure, since it emerged in the 19th Century. It presents a cross-time analysis of eight emerging democratic states during the transport revolution, focussing on railway systems. The book explores how the intervention state regulated society in Europe and Australia since the Industrial Revolution. The authors conclude that these state capacities are still governing the public domain, also at the level of the EU.

More Information
Critical Acclaim
Contents
More Information
Transportation and the State explores the role of the emerging national state in the 19th century as an organiser of territory and a governor of infrastructure. It offers a comparative historical analysis of eight industrialising nation-states and discusses their role in the democratisation and economic development of the industrialising world since the post-Napoleonic era.

Hans Keman and Jaap J. Woldendorp provide a comprehensive analysis of how nation-states have regulated the economy and society from the 19th century to the present day, with particular focus on the development and operation of railway systems. They demonstrate how states define and direct infrastructure and railway systems as part of the public domain. By exploring the impact of the railways on the evolution of the national state, Keman and Woldendorp reveal the complex interactions between the state, society and the economy, and how these are situated within their historical context. Taking a diachronic empirical approach, they challenge common misinterpretations around the role of the state and argue for a revision and reformulation of its current format and capacities.

Drawing together the academic fields of political science, economics and economic history in an innovative way, this book will be of particular interest to scholars and students looking to expand their understanding of the ways these disciplines interlink. It will also be a helpful read for policy-makers working on improving transport infrastructure in different nations.

Critical Acclaim
‘This unique and impressive study constitutes a major contribution to the comparative and historical analysis of nation-states on democratization and economic development. The original findings are based on excellent theoretical reflections and persuasive empirical analysis that provides a compelling examination of the sustainable role of the state on the implementation of the railway systems in eight countries. This book is to be commended both for what it says and for what it suggests. One would therefore like to see this book in the hands of many political scientists, economists, and historians.’
– Ferdinand Müller-Rommel, Leuphana Universität Lüneburg, Germany

‘Hans Keman and Jaap Woldendorp’s wonderful book journeys through four countries–Australia, Belgium, Italy, the Netherlands–to show the surprising ways in which state rulers and railway barons have used trains and railways to mould state and society. They show convincingly that the contemporary (nation) state has its organizational and institutional roots in the 19th century. A highly readable and deeply original take on the origins of the modern state. A must-read.’
– Liesbet Hooghe, University of North Carolina at Chapel Hill, US and European University Institute, Italy

‘In their well composed book, Keman and Woldendorp present a strong argument for the key role of the state in developing the public domain. They analyse painstakingly how modern railway systems emerged in a set of Western democracies on the basis of state–society interactions. As infrastructure is essential to economic and social welfare, the state, they show convincingly, has been the focus of policy-making and implementation resulting in the penetration of the railway everywhere. Drawing upon different models and the comparative method, this study is a major achievement in historical institutional enquiry.’
– Jan-Erik Lane, University of Geneva, Switzerland and the Public Policy Institute in Belgrade, Serbia

‘A hallmark of good books is that they tell good stories; Transportation and the State weaves theory and history together to engage the reader in a discussion of the centrality of railways in development from many perspectives. The book will clearly be of interest for scholars working with this specific subject matter, but beyond that the book may have some use as an assigned text in courses on political economy or where infrastructure and economic development are prominent topics.’
– Christopher L Atkinson, International Journal of Public Administration
Contents
Contents: 1. The State and Societal Change after the Napoleonic Wars Part 1 State and Society: Transportation and the Emergence of Collective Goods 2. Industrial Revolution: Technology, Transportation and the State 3. State and Society: Railways and Economic Development 4. The Captured State: How to Safe the Train as a Collective Good? 5. New Solutions for an Old Problem: Mixing Public and Private Goods Part 2 Nation States and Transportation: Diverse Histories but a Converging Evolution 6. Australian Railways: The Role of Politics in a Federal State 7. Railways in Italy: A Statist Project in a Fragmented Nation 8. Belgium: Two Nations with One Railway Network 9. The Netherlands: Slow Development and Reluctant State Intervention 10. State and Society and the Case of Transportation References Index