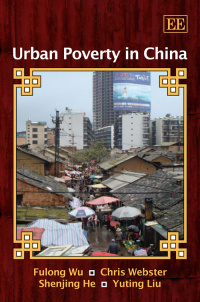 9781847209696 Edward Elgar Publishing
Fulong Wu, Bartlett Professor of Planning, University College London, UK, Chris Webster, Faculty of Architecture, University of Hong Kong, Shenjing He, Department of Urban Planning and Design, University of Hong Kong and Yuting Liu, Associate Professor, South China University of Technology, China
Publication Date: April 2010 ISBN: 978 1 84720 969 6 Extent: 272 pp
Urban poverty is an emerging problem. This book explores the household and neighbourhood factors that lead to both the generation and continuance of urban poverty in China. It is argued that the urban Chinese are not a homogenous social group, but combine laid-off workers and rural migrants, resulting in stark contrasts between migrant and workers’ neighbourhoods and villages.

More Information
Critical Acclaim
Contents
More Information
Urban poverty is an emerging problem. This book explores the household and neighbourhood factors that lead to both the generation and continuance of urban poverty in China. It is argued that the urban Chinese are not a homogenous social group, but combine laid-off workers and rural migrants, resulting in stark contrasts between migrant and workers’ neighbourhoods and villages.

This informative book tells an insightful story about evolving urban poverty in Chinese cities that will be invaluable to researchers and postgraduate students within urban studies, geography, social policy and development studies as well as Chinese and Asian studies. It will also prove to be an invaluable read for researchers in urban and social development and international development agencies.
Critical Acclaim
‘The methodology is very rigorous, combining quantitative analysis with fieldwork observation and interviews. The conceptual framework used is clearly thought out and provides unity and coherence to what is a large-scale study. The volume provides a wealth of empirical findings which are always well located within the larger field of studies of urban poverty and urban change. It will no doubt become a benchmark, providing a basis for further studies of how poverty is affecting people in urban settings. . . should prove invaluable both for scholars versed in the study of contemporary China and for those interested in labour politics and urban change in transitional societies.’
– Eric Florence, Local Economy

‘Wow! What a tour de force! This timely, masterly work does everything, from broad empirical comparison to theory, quantitative correlation to case studies of neighborhoods and quotations from individual life histories. Its findings from 25 neighborhoods in six cities demonstrate convincingly that urban destitution is not homogeneous, is concentrated in and generated by location, and has patterned institutional roots that produced varying processes of pauperization. This superb book must put to rest once and for all references to Chinese poverty as a matter of just the rural areas and their residents.’
– Dorothy J. Solinger, University of California, Irvine, US

‘Market reform has brought new forms of poverty to urban China, even while the standard of living of most urban residents has greatly improved. This research uses interviews with people in six cities to document their situation and to show how poverty is rooted in the failure of support systems in their neighborhoods and communities. It offers a stark evaluation of a system of inequalities that is only beginning to be addressed by state policy.’
– John R. Logan, Brown University, US
Contents
Contents: Preface 1. China’s New Urban Poverty: An Introduction 2. Poverty Incidence and Determinants 3. Poverty Groups: Livelihood and Trajectories 4. Impoverished Neighbourhoods 5. Poverty Dynamics: Property Rights Perspective Reference Index
Add to Wish List