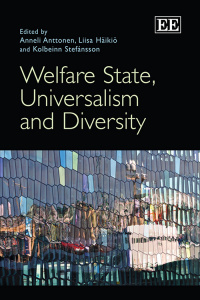 More Information
Critical Acclaim
Contributors
Contents
More Information
Welfare State, Universalism and Diversity is a thought-provoking book dealing with key ideas, values and principles of social policies and asking what exactly is meant by universal benefits and policies? Is the time of post-war universalism over? Are universalism and diversity contradictory policy and theory framings?

Well-known scholars from different countries and fields of expertise provide a historically informative and comprehensive view on the making of universal social policies. Universalism is defined and implemented differently in the British and Scandinavian social policies. Service universalism is different from universalism in pensions. The book underlines the multiple and transformative nature of universalism and the challenge of diversity. There certainly is need for a greater diversity in meeting citizen’s needs. Yet, universalism remains a principle essential for planning and implementing sustainable and legitimate policies in times characterized by complex interdependences and contradictory political aims.

This impressive book is an attempt to untangle the multiple meanings of universalism and clarify the concept’s relevance to contemporary policy debates. It will prove invaluable for students, researchers and practitioners in social policy, public policy, social administration, social welfare, social history, social work, sociology and political sciences. Policymakers and administrators involved with social and public policies, social services, social welfare, and social work will also find this book groundbreaking.
Critical Acclaim
‘This book is a most timely academic intervention. The concept of universalism is central to social policy and welfare state development yet it is rarely explored with such attention to its time and place specificities as in this book. Nordic and British authors investigate the different dimensions and meanings of universalism and the challenges it has faced. Buffeted by markets and choice on the one side and diversity on the other, can universalism survive? To find out, read on...’
– Fiona Williams, University of Leeds, UK

‘Universalism in social policy is politically challenged and normatively contested. This book examines how the principle of universalism can be understood and how it has been put into practice in various national contexts. Universalism is contrasted with the idea of diversity which has gained strength as a result of growing affluent middle classes and of multiculturalism in highly developed welfare states. The book deals with varieties of universalism and inspires a re-thinking of the normative basis of the welfare state.’
– Stein Kuhnle, University of Bergen, Norway and Hertie School of Governance, Berlin, Germany
Contributors
Contributors: A. Anttonen, A. Borchorst, J. Clarke, J. Goul Andersen, L. Häikiö, B. Hvinden, M. Kautto, J. Newman, J. Sipilä, K. Stefánsson, M. Szebehely, M. Vabø
Contents
Contents:

3. What is in a Word? Universalism, Ideology and Practice
Kolbeinn Stefánsson

4. Finding the Way between Universalism and Diversity: A Challenge to the Nordic Model
Liisa Häikiö and Bjørn Hvinden

7. A Caring State for all Older People?
Mia Vabø and Marta Szebehely

8. The Pension Puzzle: Pension Security for all Without Universal Schemes?
Mikko Kautto