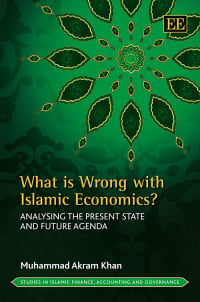 What is Wrong with Islamic Economics?

More Information
Critical Acclaim
Contents
More Information
What is Wrong with Islamic Economics? takes an objective look at the state of the art in Islamic economics and finance. It analyses reasons for perceived stagnation and also suggests a way forward.

As well as probing various myths, the book presents several innovative ideas and a methodology for developing the subject on new foundations. It also highlights weaknesses in the conventional position on prohibition of interest, which has led Islamic banks devise a series of legal tricks. The author notes how the original aim of devising a new brand of banking has become less prominent whilst Islamic banks now position themselves more closely to conventional banks. The book also offers insights into how certain traditional thinking has seemingly ignored the egalitarian spirit of the law of zakah and created a scenario where zakah is not able to help the billions of poor people around the globe.

This detailed book will appeal to students, professors, researchers, Islamic banks and finance houses, consulting companies, accounting firms, and regulatory bodies. Professional economists, libraries in research and training organizations, as well as anyone with a general interest in the topic will find much to interest them.
Critical Acclaim
‘I read with great interest the current state of Islamic economics and finance as examined by Muhammad Akram Khan, who has given a fresh outlook for the readers to find out its limitations and to search for its solutions. Khan has read widely in the subject matter, and presented his views with reference to literature and thoughtful and logical arguments. While many may not agree with his arguments or will have a better explanation, I find his arguments at least worthy of examination to strengthen the arguments of those who might oppose him. Although Khan is critical of the subject matter, he is very sympathetic to the greater objectives of Islamic economics and provides his own prescriptions to achieve those objectives.’
– M. Kabir Hassan, University of New Orleans, US

‘This is a very thought provoking book coming at a crucial stage in the development of Islamic economics and finance. Although the reader may not agree with some of the conclusions reached, it is clearly a scholarly and extensively researched piece of work; it should be read by all serious students of the subject area. Amongst other things, it throws light on the reasons why the practical implementation of Islamic economics and finance, particularly in relation to the financial system and financial institutions, has not always conformed to the true theoretical foundations laid down by Islamic scholars.’
– John Presley, Loughborough University, UK and recipient of Islamic Development Bank Prize in Islamic Finance, 2001–2002

‘“Islamic economic system is a type of capitalism with a spiritual dimension” is a major conclusion of this book. I applaud this insight of Muhammad Akram Khan. The same can be perhaps said of Islamic finance, which, in its hurry to build viable and efficient financial institutions, has ignored the very same need to start with profits-and-risk-sharing principle and no-riba principles to build pricing models to anchor the new sub-discpline. The good news is that, in the course of time to come, Akram’s advocacy may be realised since such serious works have already begun.’
– Mohamed Ariff, University Putra Malaysia and Bond University, Australia

‘Although there are many books on Islamic economics, this critical, but sympathetic, account by Muhammad Akram Khan is worthy of attention. The author has clearly read widely on the subject and appreciates the limitations of much that he has read. Islamic economics is a work in progress and by focusing on its shortcomings, Khan challenges the assumptions of many working in the field. His discussion of methodology is insightful, and even the prohibition of riba, for many the defining characteristic of Islamic finance, is examined from a fresh perspective. While many will not agree with the analysis and the conclusions, even critics should be able to appreciate the strengths of the arguments made. In summary this is a worthwhile, and in many respects an innovative, survey of the state of Islamic economics and finance. It deserves to be widely read.’
– Rodney Wilson, Durham University, UK
Contents
Contents: Preface Part I: Islamic Economics 1. Islamic Economics: State of the Art 2. The ‘Why’ of Islamic Economics 3. What is Islamic Economics? 4. Methodology of Islamic Economics 5. From Islamic Theology to Islamic Economics 6. Expanding the Frontiers of Economics 7. An Islamic Economic System or Spiritual Capitalism? Part II: Prohibition of Riba 8. Elimination of Interest: From Divine Prohibition to Human Interpretation 9. Prohibition of Riba in the Primary Sources of Islam 10. Theory of Riba: The Orthodox Interpretation 11. Assessment of the Orthodox Interpretation 12. Modernist Thinking on Riba 13. Prohibition of Riba: The Continuing Debate 14. Unresolved Issues in the Orthodox Interpretation of Riba 15. Practice of Interest-based Finance Among Muslims 16. Prohibition of Riba: The Way Forward Part III: Islamic Banking and Finance 17. Theoretical Basis of Islamic Banking 18. Problems of Profit–Loss Sharing 19. Practice of Islamic Banking and Finance 20. A Trajectory of Legal Tricks (Hiyal) 21. Islamic Insurance (Takaful) Part IV: Zakah in the Present Age 22. Contemporary Application of the Law of Zakah Bibliography Index
Add to Wish List
eBook for individuals
978 1 78254 415 9
From $57.56
Click here for options
eBook for library purchase
978 1 78254 415 9
View sample chapter and check access on: