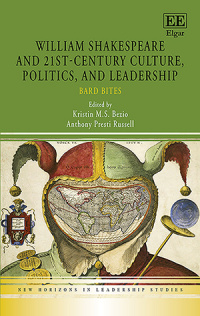 As perhaps the most oft-cited author in the West outside of the Judeo-Christian Bible, Shakespeare has often been considered a sage, providing manifold insights into our shared human qualities and experiences across time and geography. The editors and authors of this accessible book leverage the now global scope of that sibylline reputation to explore what the Bard might tell us about ourselves, our politics, our leaders, and our societies today.

The chapters are written with critical rigor and will appeal to scholars and students in leadership and literary studies but are accessible to non-Shakespeare experts. Anyone looking to explore the ongoing relevance of Shakespeare's work will find this volume enlightening and entertaining.

Critical Acclaim
‘Shakespeare Behind Bars was founded to assist the incarcerated in finding their authentic voices through an immersive experience in Shakespeare’s original language, complex themes, and multiple meanings. I find myself today, happily aided in this process by writers in this collection from a rich variety of backgrounds who find truth in historical Shakespeare.’
– Curt L. Tofteland, Founder, Shakespeare Behind Bars

‘This wide-ranging volume marks an exciting moment in the study of leadership and literature alike. Truly interdisciplinary in their approach, informed by rigorous scholarship, and engagingly written, the book’s chapters help to broaden and deepen our understanding of Shakespeare’s continuing—in some ways even increasing—resonance with problems of politics, power, and leadership in our world today.’
– Nicholas Warner, Claremont McKenna College, US

Introduction: “I that please some, try all”: Shakespeare this time 1
Anthony Presti Russell and Kristin M. S. Bezio

PART I PERFORMANCE
1 Performance and the political subject in Richard II 11
Melissa Caldwell
2 “Liars and swearers”: Shakespeare’s Macbeth and the
dissemblance of modern autocrats 30
Ryan Farrar
3 Learning about leadership from Coriolanus and Coriolanus 51
Peter Iver Kaufman

PART II TRUTH
4 “Lies like truth”: Macbeth and the American Dream 67
Anthony Presti Russell
5 When it is wise to play the fool: a lesson in servant
leadership, courtesy of King Lear 90
Katey Roden
6 Post-truth and pre-truth: how rhetoric shapes reality in
Boyle’s Certain Physiological Essays , Shakespeare’s
Othello , and the language of Donald Trump 109
Samantha Dressel

PART III RESISTANCE
7 Much ado about me too: the personal and political activism
of Shakespeare’s women 131
Jess Landis
8 Importance of highlighting the rotten state: a study of
Vishal Bharadwaj’s Haider (2014) and its subversive strategies 149
Debaditya Mukhopadhyay
9 The Shakespeare Company Japan and regional self-fashioning 164
Tetsuhito Motoyama and Fumiaki Konno

PART IV FREEDOM
10 “Mountainish inhumanity”: the politics of religion,
refugees, and ego from Sir Thomas More to Donald Trump 183
Kristin M. S. Bezio
11 Twelfth Night and gender fluidity 202
Maria Carrig
12 Shakespeare in other tongues: translation and adaptation
into Yoruba and Hausa in text, film, and stage productions
in Nigeria 218
Kayode Gboyega Kofoworola
Epilogue and post-script: the art of the De’ill, followed by
a discussion between “M” and the editors 236
Raphael Seligmann