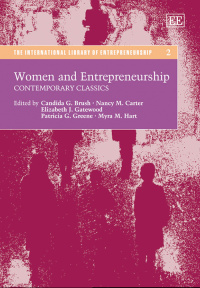 More Information
Critical Acclaim
Contributors
Contents
More Information
Women and Entrepreneurship is a careful selection of the most significant previously published material which has been influential in shaping the field of women’s entrepreneurship. The volume presents early works which laid the foundations first asking whether women entrepreneurs were different, exploring issues about women entrepreneurs and their businesses and delving into more specific questions on individual, organizational, and environmental matters. An organizing framework connects the works from theory to the conceptual categories of human capital, including personal cognition and goals, social capital, financial capital, strategic choice, performance, outcomes and environment.

The volume provides a comprehensive introduction for any researcher entering this field of study and illustrates those areas where additional research is greatly needed.
Critical Acclaim
‘This book is invaluable since it provides a cohesive overview of different theoretical perspectives, empirical findings and methodologies that address women’s entrepreneurship. . . this collection should be the first stop for all those starting their research journey in the field as well as a handy companion for those further down the track. It is a valuable reference tool that provides easy access to the key articles on women’s entrepreneurship, all effectively organised along the lines of seven dominant strands of research. The volume will certainly be a “launching pad for future scholastic work”.’
– Anne de Bruin, Gender in Management

‘. . . a very useful tool for all researchers interested in the study of a field that, in recent years, has been gaining increased attention within entrepreneurship. It assembles a good set of both theoretical and empirical contributions for our understanding of women’s entrepreneurial behavior, and opens important research avenues not only within each of the five constructs selected by the editors but also within the relationships that may be established between them.’
– Vasco Eiriz and Luís M. de Castro, International Entrepreneurship and Management Journal

Research Handbook on Entrepreneurship as Practice