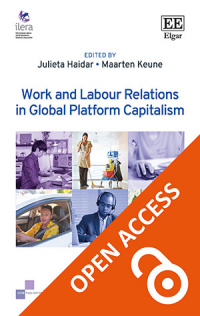 This engaging and timely book provides an in-depth analysis of work and labour relations within global platform capitalism with a specific focus on digital platforms that organise labour processes, known as labour platforms. Well-respected contributors thoroughly examine both online and offline platforms, their distinct differences and the important roles they play for both large transnational companies and those with a smaller global reach.

More Information
Critical Acclaim
Contributors
Contents
More Information
This engaging and timely book provides an in-depth analysis of work and labour relations within global platform capitalism with a specific focus on digital platforms that organise labour processes, known as labour platforms. Well-respected contributors thoroughly examine both online and offline platforms, their distinct differences and the important roles they play for both large transnational companies and those with a smaller global reach.

Chapters explore how labour platforms have become controversial and ambiguous as they increasingly appear to provide important sources of work and income globally but conversely raise concerns over exploitation of workers and the lack of legal protection provided to them. Offering a global perspective and including studies from different continents, the book covers three key areas: platform work in the wider context of contemporary capitalism, labour platforms from an international division of labour perspective, and labour processes and relations.

This informative and thought-provoking book is an excellent resource for scholars with a particular interest in political economy, the sociology of work, labour relations and labour policies. Policymakers and regulators looking to understand how to effectively apply existing regulations for platform workers when creating new business models will also find this an invigorating read.

Critical Acclaim
‘I highly recommend this book to those who have already stepped into the terrain of understanding the platform economy, those who are just taking that step, and those who have not yet begun but are willing to do so. Why? Because this is one of the few existing books that offers a rich, critical, fresh, and contemporary analysis of the platform economy embedded into capital and capitalism worldwide. It reveals what global platform capitalism entails by uncovering its internal social, economic, and political contradictions and tensions from a much-needed critical standpoint.’
– Valeria Pulignano, ILR Review

‘With this edited collection of insightful chapters, Julieta Haidar and Maarten Keune capture the essence of the “contradictions” and “tensions” surrounding the emergence of work and labor relations within the platform economy. This collection memorably illustrates how hegemonic capitalism generates “social order” by re-producing cleavages through establishing new socio-economic and political interdependencies on a global basis. This is a “must” for everyone who wants to learn about the platform economy.’
– Valeria Pulignano, University of Leuven, Belgium

‘In the 21st century we are witnessing what seems to be a paradox. On the one hand, we have an expansion of algorithms and artificial intelligence generating companies that are increasingly wealthy. On the other, there is a new growing portion of the working class who find themselves in an increasingly precarious position and without basic labour rights. How does exploitation in platform capitalism take place? What is new and what is old in these labour relations? How does managerial control occur? And how will the struggles and resistance of this new proletariat of the digital age develop? To better comprehend this complex social phenomenon, this book offers an important contribution.’
– Ricardo Antunes, University of Campinas, Brazil
Contributors
Contributors: C. Arias, H. Barnard, G. Bensusán, J. Berg, P. D’Cruz, M. Graham, J. Haidar, I. Hjorth, S. Joyce, M. Keune, V. Lehdonvirta, W.-F. Leung, P. Marčeta, N.D. Menéndez, E. Noronha, U. Rani, H. Santos, N. Srnicek, M. Stuart, K. Vandaele, M. Zukerfeld
Contents
Contents:

Trade Shows in the 21st Century