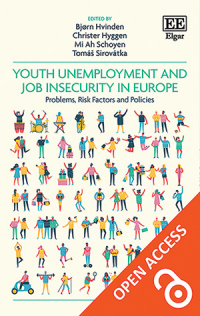 Providing original insights into the factors causing early job insecurity in European countries, this book examines its short- and long-term consequences. It assesses public policies seeking to diminish the risks to young people facing prolonged job insecurity and reduce the severity of these impacts. Based on the findings of a major study across nine European countries, this book examines the diverse strategies that countries across the continent use to help young people overcome employment barriers.

Based on the findings of a major study of nine European countries, this book examines the diverse strategies that countries across the continent use to help young people overcome employment barriers. The authors present recommendations for governments to improve the job market environment and to support young people in finding suitable and stable employment.

A vital tool for European policymakers, this book provides new knowledge that will help improve existing policies, at both national and European levels. The detailed analysis of original data collected through innovative methods will prove highly useful to public policy and European studies scholars.

Critical Acclaim
‘...the book is an extremely valuable addition to the evidence base on youth unemployment and should be read for those seeking up-to-date, cross-national and detailed analysis on what is sure to be a continuing topic of interest for the social policy community in an age of youth labour market precarity.’
– Sarah Weakley, Social Policy & Administration

‘...the book by Hvinden et al. undoubtedly represents a significant enrichment in the comparative literature on youth labour markets. It builds bridges between various areas which often have been disjointed in earlier works. Due to its many strengths, the book is a highly recommendable read for scholars from various disciplines engaged in the field of youth and labour market studies. At the same time, the strong policy orientation and the detailed recommendations in the final chapter make it also a valuable asset for policymakers both at the national and international level.’
– Dirk Hofäcker, Journal of Social Policy

‘This excellent book analyses the challenge of youth unemployment, by focusing on its causes and consequences, during the Great Recession in Europe. Throughout the volume, it uses the notions of resilience, capability, and active agency, while also considering policy responses at various levels of governance. It is a very clearly articulated book, conceptually and analytically, which should be read by academics, students and policymakers interested in welfare and labour market issues.’
– Caroline De La Porte, Copenhagen Business School, Denmark

‘This is the first volume of one of the most innovative studies on unemployment in recent years, exploring the sources of the persisting high rates of youth unemployment since the Great Recession. It provides valuable insight into the diverse patterns of youth unemployment and insecurity in the EU, the contribution of employer recruitment policies to scarring effects and the changing nature of national and EU policy responses.’
– Duncan Gallie, Nuffield College, Oxford, UK

PART I: THE PROBLEM OF EARLY JOB INSECURITY AND THE CRISIS
2. Mapping early job insecurity impacts of the crisis in Europe
Maria Karamessini, Maria Symeonaki, Dimitris Parsanoglou and Glykeria Stamatopoulou

4. The Great Recession and the youth labour market in European countries: The demographic versus the labour market effect
Piotr Michoń