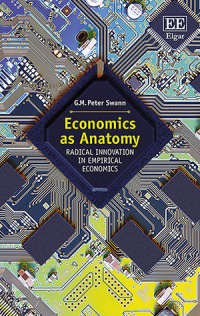 9781786434852 Edward Elgar Publishing
G.M. Peter Swann, Emeritus Professor of Industrial Economics, Nottingham University Business School, UK
Publication Date: 2019 ISBN: 978 1 78643 485 2 Extent: 264 pp
For most of his career, Peter Swann’s main research interest has been the economics of innovation. But he has also been preoccupied with a second question: what is the best way to study empirical economics? In this book, he uses his knowledge of the first question to answer the second. There are two fundamentally different approaches to innovation: incremental innovation and radical innovation – ‘radical’ in the sense that we go back to the ‘roots’ of empirical economics and take a different tack. An essential lesson from the economics of innovation is that we need both incremental and radical innovation for the maximum beneficial effect on the economy. Swann argues that the same is true for economics as a discipline. This book is a much-awaited sequel to Putting Econometrics in its Place which explored what other methods should be used, and why. This book is about the best way of organising the economics discipline, to ensure that it pursues this wide variety of methods to maximum effect.

How to Conduct Qualitative Research in Social Science

Handbook of Spatial Analysis in the Social Sciences