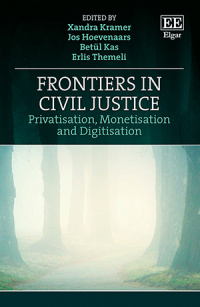 More Information
Critical Acclaim
Contributors
Contents
More Information
This book studies three interrelated frontiers in civil justice from European and national perspectives, combining theory with policy and insights from practice: the interplay between private and public justice, the digitisation of justice, and litigation funding. These current topics are viewed against the backdrop of the requirements of effective access to justice and the overall goal of establishing a sustainable civil justice system in Europe.

With perspectives from an impressive selection of contributors the book takes on a pan-European perspective and zooms in on several European jurisdictions, thereby providing a holistic exploration of current civil justice debates and frontiers. It includes chapters dedicated to the interaction between public and private justice, the digitisation of both private dispute resolution and court litigation, including the rapid development and use of advanced forms of Artificial Intelligence, and the funding of justice, especially collective actions and settlements by means of private funding and common funds.

Addressing these key issues in the current European debate on civil justice, this book will be an ideal read for academics and policy makers interested in the most recent frontier developments and innovations. Legal practitioners will also benefit from the insight into complex topics such as litigation funding, legal conflicts in a digital age, and resolving disputes in a private setting.

Critical Acclaim
‘This truly topical book explores three new frontiers on the route to an efficient, cost-effective, and fair dispute resolution system adjusted to the needs of the 21st century. One of the most innovative teams of European researchers led by Xandra Kramer continues to build bridges between the old topic of access to justice and exciting contemporary challenges.’
– Alan Uzelec, Zagreb University, Croatia

‘Frontiers in Civil Justice is the fruit of a five-year project examining innovation and access to justice. Ranging from ADR, to digital justice and AI’s potential role in delivering justice, to the perennial topic of collective redress, each chapter is insightful and thought-provoking. This is a richly detailed work that repays careful study.’
– John Sorabji, University College London, UK

PART I ADR AND THE COURTS – SHAPING THE
INTERACTION BETWEEN PUBLIC AND
PRIVATE JUSTICE
2 The untapped potential of a structured interaction between
courts and ADR for the resolution of consumer disputes in the EU 22
Betül Kas
3 Formal and informal justice in Belgium 40
Stefaan Voet
4 Formulating a more principled approach to ADR within
the English civil justice system 61
Masood Ahmed
5 Alternative dispute resolution, justice and accountability in
Norwegian civil justice 81
Anna Nylund