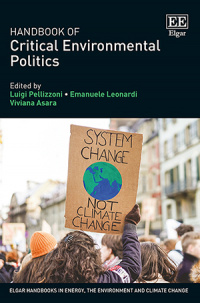 More Information
Critical Acclaim
Contributors
More Information
This timely Handbook offers a comprehensive outlook on global environmental politics, providing readers with an up-to-date view of a field of ever increasing academic and public significance. Its critical perspective interrogates what is taken for granted in current institutions and social and power relations, highlighting the issues preventing meaningful change in the relationship between human societies and their biophysical underpinnings.

Scholars and students in the social sciences, in particular those studying politics and public policy, with an interest in the environment and climate change will find this Handbook to be essential reading. It will also be useful to academics in other disciplines related to ecology and environmental politics, as well as politicians and practitioners involved in green transition policies.

Critical Acclaim
‘This magnificent Handbook shows how 21st century politics occupies the interstices of everyday life – from the digitised molecule to the spouse tax; from geopower to post-work. The editors are relational thinkers, well aware that the environment, so-called, is not the same as “nature”; rather, their title conveys an academic field subjecting itself to a reflexive process of decolonisation. This open textured epistemological stance owes much to the Frankfurt School's refusal of modernity. The spectrum of contested themes runs through debates over financialisation of nature, smart cities, genetic engineering, even a psychoanalysis of sustainability narratives! The call is for regulatory proposals and grassroots transitions sensitive to both feminist critique and to epistemic extractivism from Indigenous cultures. That said, the editors want to see discourse deconstruction replaced by a prefigurative politics, grounded in embodied practices. As they say, the task of critique is to make visible other ways of worlding.’
– Ariel Salleh, Nelson Mandela University, South Africa