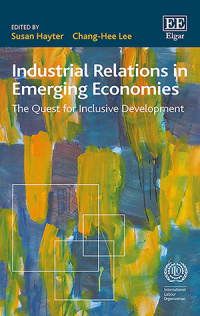 The Quest for Inclusive Development

More Information
Critical Acclaim
Contributors
Contents
More Information
By examining the evolution of industrial relations institutions in the emerging economies of Brazil, China, India, South Africa and Turkey, the authors in this book assess the contribution of these institutions to inclusive development.

Industrial Relations in Emerging Economies uses real-world examples to assess the relevance of the conceptual frameworks used to examine employment relations. The chapters focus on the evolution of industrial relations institutions and the role that these have played in periods of economic and political transition. They demonstrate that rather than acting as a constraint on development, trade unions can contribute to stability, security and equity. The contribution of industrial relations institutions to inclusive development nonetheless remains the subject of debate, viewed by some as increasingly irrelevant to the vast numbers of workers in the informal economy. The authors here, however, reveal a continuing demand for independent collective interest representation in labour relations, whether in the informal economy or in rapidly industrializing districts.

This book will prove an interesting and stimulating read for students, academics and researchers in the fields of human resources, industrial relations, sociology and labour economics in addition to trade union researchers and policy-makers.

Critical Acclaim
‘This book is a valuable addition to a small pool of literature that examines intersections between industrial relations institutions and the development trajectories of “emerging” economies.’
– Michael Gillan, Journal of Industrial Relations

The volume is a valuable handbook for scholars, students, and practitioners seeking a comprehensive overview of IR on one or more of the country case studies.’
– Frido Wenten, ILR Review

‘This timely volume goes a long way towards filling an important gap in the literature on industrial relations. It shows that the role that trade unions play in the development process is contested terrain, exposing the inherent limitations of pluralist frameworks in the largest emerging economies.’
– Richard Hyman, London School of Economics, UK

‘As the share of emerging economies in the global economy grows, interest in industrial relations in these countries is also increasing among academics, policy-makers and practitioners. This book makes a significant contribution to the analysis of industrial relations' role relative to inclusive growth in the era of socio-economic polarization.’
– Dong-One Kim, President, International Labor and Employment Relations Association (ILERA)

Engineering the World of Work