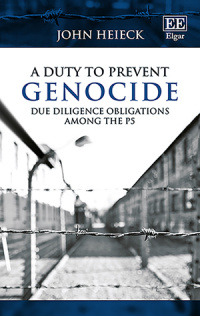 A Duty to Prevent Genocide

Due Diligence Obligations among the P5

9781788117708 Edward Elgar Publishing
John Heieck, University of Kent, Brussels School of International Studies, UK
Publication Date: 2018 ISBN: 978 1 78811 770 8 Extent: 264 pp
This perceptive book analyzes the scope of the duty to prevent genocide of China, France, Russia, the UK, and the US in light of the due diligence standard under conventional, customary, and peremptory international law. It expounds the positive obligations of these five states to act both within and without the Security Council context to prevent or suppress an imminent or ongoing genocide.

More Information
Critical Acclaim
Contents
More Information
The permanent five (P5) members of the United Nations Security Council – China, France, Russia, the UK, and the USA – have a firm duty to prevent genocide in light of the due diligence standard under conventional, customary, and peremptory international law. This perceptive book explores the positive obligations of these states to act both within and without the Security Council context to prevent or suppress imminent or ongoing genocide.

John Heieck successfully argues why the duty to prevent genocide is not only a customary, but also an absolute norm of international law, and analyses the scope of the due diligence standard regarding the duty to prevent genocide. In doing so, he considers the ramifications of this on the actions of the P5 members of the Security Council, both inside and outside of this eminent body. Significantly, Heieck proposes a legal test for identifying jus cogens norms, and explores the effect of these on the actions and omissions of specifically identified members of the United Nations (UN).

Topical and insightful, A Duty to Prevent Genocide will be an important read for both academics and students of international law and politics who wish to further understand the legal nature of the duty of the P5 members to prevent genocide. It will also provide valuable insights for policy makers of the P5 member states.
Critical Acclaim
‘This is a closely argued and well-written book, which combines a firm grasp of controversial issues in international law, with a genuine and enthusiastic originality. Heieck’s focus is the duty to prevent genocide. He asks the question how this duty affects the bedrock principle of the current international order – the prohibition of the use of force. Highly recommended for students and scholars of international law.’
– Bill Bowring, University of London, UK