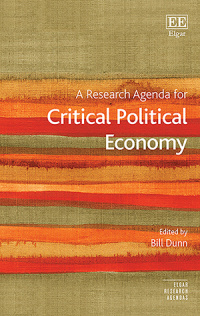 Forward thinking and provocative, this Research Agenda demonstrates different approaches to the field from experts focusing on global and local, and historical and contemporary issues. It asserts that critical political economists differ from their mainstream counterparts through the variety of methods they use and the questions they pose.

Eminent global scholars examine a diverse selection of interdisciplinary themes, raising questions surrounding future research in the area, offering examples and linking the theory to its implications for practice and policy. Chapters explore economic growth and the ideology of development, sweatshop economics, experimental economics, the land question in urban economics, money and finance, and thinking beyond capitalism with the solidarity economy.

A Research Agenda for Critical Political Economy will be a fascinating read for students and scholars of political economy, political science and economics. With case studies and practical examples of the application of the topic, it will also be an invigorating read for economists and policy makers looking for alternative approaches to the field.

Critical Acclaim
‘To be “critical” as a political economist is to be part of a rich and varied heritage, within which a series of alternative perspectives are articulated and defended in the name of a broader, common endeavour. This book ably showcases the diverse and pluralistic nature of contemporary critical political economy scholarship, something which is needed more than ever in times of the coronavirus and the associated economic, political and social upheavals.’
– Ian Bruff, University of Manchester, UK
Contributors
Contributors: A. Bhagat, F.H. Bittes Terra, N.N. Dados, S. Dow, B. Dunn, F. Ferrari Filho, S.P. Hargreaves Heap, A. Herod, J. Matthaei, A. Mezzadri, S.U. O’Hara, F. Obeng-Odoom, B. Selwyn, E. Sheppard, S. Soederberg, F. Stilwell

3. Economic Growth and the Ideology of Development
Benjamin Selwyn

6. For a Critical Political Economy of International Trade
Bill Dunn

7. Sweatshop Economics, the Poverty of Trade Theory and the Making of Inequality Across Scales
Alessandra Mezzadri

14. The Political Economy of Displacement Governance: The Case of Refugees in the European Union
Ali Bhagat and Susanne Soederberg