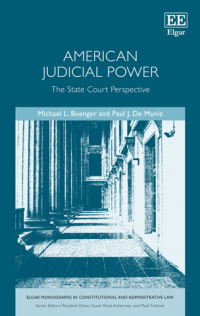 More Information
Critical Acclaim
Contents
More Information
American Judicial Power: The State Court Perspective is a welcome addition to the breadth of studies on the American legal system and provides an accessible and highly illuminating overview of the state courts and their functions.

The study of America’s courts is overwhelmingly skewed toward the federal government, and therefore often overlooks state courts and their importance. Michael Buenger and Paul De Muniz fill this gap in the study of American constitutionalism, as they examine the wide and distinctive powers these courts exercise, and their role in administering the bulk of the nation’s justice system. This groundbreaking work covers many critical topics pertaining to the state courts, including: a comparison of the role of state and federal courts, the history of America’s state courts, the judicial selection processes utilized in the states, the unique roles assigned to state courts and the varying structure of those courts, the relationship between state judicial power and state legislative power, and the opportunities and challenges that are and will be facing the state courts.

With an insightful foreword from Sanford Levinson, this revolutionary book will be of interest to students, educators, and researchers in the fields of law, political science, and government. Constitutional law experts will also benefit from an analysis of the state courts and their powers.

Critical Acclaim
‘While no one can deny the broad sweep of US Supreme Court landmarks, if one really wants to understand the justice system in America, and the interrelationship of courts and governance, one cannot overlook state systems. American Judicial Power does a thorough job of explaining the many interactions of state governments with state courts, including especially the allocation of governmental powers between state and local governments. For those seeking to understand state government beyond its superficial parallels to the federal system, American Judicial Power is an essential work.’
– Michael A. Wolff, Saint Louis University, School of Law, US

‘Justice for most American citizens lives in the corridors and on the websites of state, not federal, courts across the country. This book is a much-needed and extraordinary addition to the scholarship about those courts. State courts are overburdened and underfunded, but as the authors note, they are innovative and exciting as well. Each court is a creature of its own state’s history and culture, but ideas and attributes cross state lines regularly. Readers will come away from this book with a far greater understanding of where our state courts have been, and where they are going.'
– Rebecca Love Kourlis, IAALS, Institute for the Advancement of the American Legal System

‘In the preamble to the United States Constitution the country’s founders pronounced that their paramount purpose was to “establish justice”. But how and why those architects of the American justice system adopted a bifurcated federal and state system of courts was obscure until the publication of American Judicial Power. Buenger and De Muniz illustrate for us a blueprint of the amazingly crafted separation of state and federal power, subject matter jurisdiction and appellate review that is the foundation of the world’s most transparent and balanced justice system. American Judicial Power leads the reader through the evolution of state and federal judicial authority, judicial selection and balancing of separation of powers not only among the legislative, executive and judicial branches of government but through the preservation of the precarious equilibrium of a democratic republic. Written by two dynamic court leaders, American Judicial Power connects the past with the future.’
– Mary Campbell McQueen, President, National Center for State Courts, Williamsburg, Virginia, US