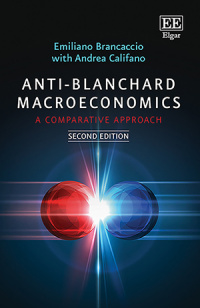 More Information
Critical Acclaim
Contents
More Information
Olivier Blanchard, former chief economist of the International Monetary Fund (IMF), is author of one of the most important standard macroeconomics textbooks, which is used throughout the world. Endorsed by Blanchard himself, Anti-Blanchard Macroeconomics critically analyzes prevailing economic theory and policy in comparison with alternative approaches. This thoroughly revised edition represents a field of research that has developed through intense theoretical debates, continual empirical testing and the resultant disputes about economic policy.

Emiliano Brancaccio and Andrea Califano succinctly explore the relationship between theoretical models and economic policies, providing readers with examples and empirical exercises, and showing how the conclusions of different theories can be empirically tested. This updated second edition examines the links between the issues at the core of macroeconomic debate, including economic growth, economic crises, labour market reforms, government debt sustainability, the behaviour of central banks and the stock market, among many others.

• Contains an analysis of the economic policies, consequences and theories surrounding the Covid-19 pandemic
• Examines the connection between contemporary issues in world politics, economic theory and policymaking
• It overcomes the typical contradiction between the opportunity to offer students a preliminary mainstream education and the need to nurture rather than crush their critical spirit
• It helps students to understand that economics is not a discipline that changes in a smooth, linear manner but, on the contrary, represents a dynamic field of research that develops through intense theoretical debate and continual empirical testing, and is shaped by the resultant disputes concerning economic policy
• Includes the typescript of a lively and informative debate between Emiliano Brancaccio and Olivier Blanchard, together with comparative economic policy examples.
Critical Acclaim
Acclaim for the first edition:

‘When Emiliano asked me to endorse Anti-Blanchard Macroeconomics, I was a bit taken aback. You can guess why. But I agree with him that we should always question our assumptions, confront them with the facts, and be open to change if the facts dictate it. Questions such as whether we can expect the economy to return to health by itself, whether recessions have permanent adverse effects, whether the interest rate channel of monetary policy works, are essential ones. For the time being, I stand by the conclusions of my textbook, but I am happy and indeed eager to see them challenged.’
– Olivier J. Blanchard
Contents
Contents: Presentation to the first edition Mauro Gallegati Preface to the first edition Robert Skidelsky 1. Introduction 2, Blanchard’s AS–AD model 3. The alternative model 4. Blanchard’s “new approach”: the IS–LM–PC model 5. The competing approaches: theory and policy Appendix 1 Labour flexibility and unemployment Appendix 2 Contractionary fiscal policy and fiscal multipliers Appendix 3 On the pandemic trade-off between health and
production Index
Add to Wish List
eBook for individuals
978 1 80220 076 8
From £21.56
Click here for options
eBook for library purchase
978 1 80220 076 8
View sample chapter and check access on: