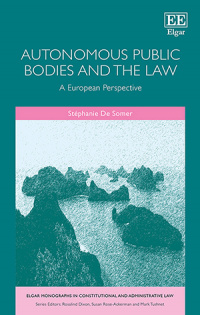 Autonomous Public Bodies and the Law

9781785364679 Edward Elgar Publishing
Elgar Monographs in Constitutional and Administrative Law
Stéphanie De Somer, Postdoctoral Researcher, FWO Flanders, University of Antwerp, Belgium and academic advisor (Of Counsel) for law firm Van Olmen & Wynant, Brussels, Belgium
Publication Date: 2017 ISBN: 978 1 78536 467 9 Extent: 384 pp
This insightful book discusses the impact of EU law on the creation and empowerment of autonomous public bodies (APBs) at Member State level and analyzes recent attempts of European states to rationalize delegation to APBs. It examines the tensions between these trends: under what conditions can APBs be considered legitimate forms of government in the light of modern conceptions of constitutionalism, the rule of law and democracy - values that are deeply rooted in European constitutions? And to what extent do EU obligations on the independence of national regulators, data protection authorities and the like conflict with those conceptions?

More Information
Critical Acclaim
Contents
More Information
This book aims to give readers an insight into two dynamics that influence the phenomenon of autonomous public bodies (APBs) in the European legal sphere today. Stéphanie De Somer first studies both phenomena – EU impulse and national restraint – as standalone trends and then addresses the tensions between them. The first trend covers EU legislation that obliges Member States to entrust the implementation of substantive supranational rules to entities that enjoy a considerable degree of autonomy vis-à-vis central government institutions. The second trend refers to a counter-movement at the national level, where initiatives have been taken to rationalize and restrain the use of APBs.

Central to the book is the somewhat controversial question of whether the EU, which is itself often criticized for lacking democratic legitimacy, is disregarding fundamental principles regarding the democratic legitimacy of national administrations when imposing these institutional obligations on its Member States. As far as domestic law is concerned, the book offers an integrated approach that truly compares national legal systems. De Somer also incorporates the results of in-depth interviews with representatives of APBs in Belgium and the Netherlands. Focusing on these two contemporary trends, this book demonstrates the extent to which two fundamental systems of rules and principles increasingly influence and transform the phenomenon of APBs

This book is relevant not only for legal academia, but also for scholars working in the fields of political science and public administration. National legislatures, governments, regulatory bodies, data protection authorities and other APBs may also find this book useful.
Critical Acclaim
‘This book brings many new insights to the phenomenon of APBs, reopening some of the long-standing debates surrounding their very rationale.’
– Common Market Law Review 2020

‘The “de-politicization” of governance in favour of agencies or “APBs” is a familiar aspect of late twentieth century governance. In the European Union, however, the pace has only picked up since the late 1990s. The rapid escalation in agency power, more especially in the Eurozone, is sufficient to raise serious concerns about the impact on democracy, more especially since, as the author notes, the European Union is increasingly insisting on the transfer of powers at national level from government to APBs. This study of the impact of EU law on APBs in four Member States by Stéphanie De Somer is therefore both welcome and timely. Drawing lessons from her comparative study, De Somer suggests ways in which agency power can be structured and APBs made more democratically accountable, bringing the study into line with the tone of recent events on the political scene.’
– Carol Harlow, London School of Economics, UK
Contents
Contents: 1. Introduction 2. EU impulse 3. National Restraint 4. Conflict 5. Reconciliation 6. Final conclusions and recommendations Bibliography Index