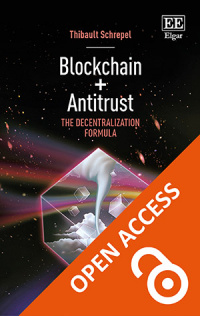 9781800885523 Edward Elgar Publishing
Thibault Schrepel, Associate Professor, Department of Transnational Legal Studies, VU Amsterdam University, the Netherlands, and Faculty Affiliate, The CodeX Center, Stanford University, US
Publication Date: 2021 ISBN: 978 1 80088 552 3 Extent: 304 pp
This is an open access title available under the terms of a CC BY-NC-ND 4.0 License. It is free to read, download and share on Elgaronline.com.

This innovative and original book explores the relationship between blockchain and antitrust, highlighting the mutual benefits that stem from cooperation between the two and providing a unique perspective on how law and technology could cooperate.

More Information
Critical Acclaim
Contents
More Information
This innovative and original book explores the relationship between blockchain and antitrust, highlighting the mutual benefits that stem from cooperation between the two and providing a unique perspective on how law and technology could cooperate.

Delivering a legal, economic, and technical analysis of antitrust and blockchain, Thibault Schrepel provides a well-rounded examination of their mutual flaws and the limitations that occur when they ignore each other. He explores the anticompetitive practices that may arise in the field as well as covering enforcement issues before showcasing the potential of blockchain and antitrust to complement one another. He offers different ways of creating effective regulations and enforcement mechanisms for the purpose of benefiting their common interests.

Covering key topics such as decentralization, blockchain evolution, and the objectives of competition law, this book will be of particular interest to academics and students researching at the intersection of law and technology. It will also be useful for legal practitioners interested in blockchain, as well as antitrust agencies and policy-makers.
Critical Acclaim
‘As our world becomes increasing digital, both law and code become central to management of rights and access to justice. The two modes of management are often seen as being in conflict, but increasingly far-sighted scholars like Prof. Schrepel are seeing that there are opportunities for synergy. This book is a clear step forward in building a system of digital law that works, and a must-read for those concerned about our digital future.’
­– Alex ‘Sandy’ Pentland, Massachusetts Institute of Technology, US

‘From Code of Hammurabi (1754 BC) to the Internet of Things and Artificial Intelligence this book links a deep understanding of law and technology, Blockchain and Antitrust. It offers a highly appreciated contribution to the Blockchain debate and practical use cases, which are very much needed in often theoretical discussions.’
– Theodor Thanner, President of the Austrian Federal Competition Authority, Austria

‘Grounded in Schrepel's solid understanding of the law and technology debate, this book offers a unique framework and important guide for thinking through the many ways in which Antitrust law and Blockchain technologies can be complementary and create efficiencies from collaboration.’
– Roland Vogl, CodeX – The Stanford Center for Legal Informatics, US

‘Packed with stimulating suggestions and insights, this is the first book exploring the role of competition law in regulating blockchain. Thibault Schrepel skillfully blends an accessible examination of the technology at play with a discussion about how competition law should be applied to both control and support its development.’
– Giorgio Monti, Tilburg University, the Netherlands

‘Traditional financial payment systems run by banks or by tech companies such as PayPal have natural network effects, and are held to be open to some degree of monopoly. Blockchain systems, because they are highly distributed and transparent, are often said to be free of such tendencies. Thibault Schrepel argues this isn’t true: blockchains may foster anticompetitive practices in many ways. As our economic world moves increasingly into cryptocurrencies and blockchain transactions, Schrepel’s analysis and suggested remedies are both timely and important.’
– W. Brian Arthur, Santa Fe Institute, US

‘Data and Antitrust have become a hot button issue. However, as of yet there is little legal scholarly writing on the topic of how blockchain with its promise of data integrity will change this debate. This book tries to do precisely that, and is an incredibly useful read for any legal scholar interested in the digital space.’
– Catherine Tucker, Massachusetts Institute of Technology, US

‘Thibault Schrepel’s Blockchain + Antitrust: the Decentralization Formula, is an eminently readable and satisfying examination of the history, technology, and incipient law of Blockchain – from its historical roots in a libertarian search for order, to its complex and often misunderstood internal workings, and finally to the abundant legal concerns that might loom in the future. This book is particularly helpful for someone who needs to be guided through Blockchain’s most important technical and operational elements.’
– Herbert Hovenkamp, University of Pennsylvania Law School and the Wharton School, US

‘By reducing transaction costs and facilitating trust among parties to transactions, blockchains reduce the need for centralized legal structures in economic activity. They also make transactions less transparent to regulators and can be used to harbor anticompetitive practices. Hence they contribute to deconcentrating economic structures and, simultaneously, raise challenges for competition law enforcement. However, competition authorities can also benefit from the blockchain technology in their enforcement activity. Thibault Schrepel in this path-breaking book explores the evolving complex relationship between blockchain and antitrust and the ways they can benefit from one another. This forward-looking and fascinating analysis is a must read for anyone interested in one of the most important technological development of our time.’
– Frederic Jenny, OECD Competition Committee, France

‘More than any other field of business law, antitrust has much in common with emerging blockchain technologies. Dr. Schrepel has been at the forefront of research in the relationship between these two fields. His hopeful approach, as discussed in this book, towards a mutually beneficial relationship between antitrust law amd blockchain technology will help ensure maximal realization of the efficiency-enhancing promise of blockchain – namely, lowering the costs of networking and increasing transparency. Moreover, this book does an excellent job of discussing both the procompetitive (favored by the antitrust laws) attributes of blockchain and its ability to facilitate anticompetitive harm (outlawed by the antitrust laws), and showing how the law and the emerging technology can live in harmony to the benefit of consumers. I was proud, as head of the DOJ Antitrust Division, to have the Division join Dr. Schrepel’s academic project on this topic and look forward to his continued contributions to this important emerging field.’
– Makan Delrahim, Department of Justice Antitrust Division, US

‘This book is the first of its kind. Schrepel’s work will no doubt appeal to antitrusters looking for a didactic introduction to the blockchain. It will also be of more general interest to any reader with a concern for the future of law and public policy in a technology-driven world. A must-read.’
– Nicolas Petit, European University Institute, Italy

‘Blockchain technology has been offered as a solution to any number of problems, and sometimes – to its detriment – as a panacea. Here, Schrepel follows the thread of decentralization to explore this technology alongside the goals of antitrust law. It's a worthy provocation, even as blockchains’ value, and future, are hotly contested.’
– Jonathan Zittrain, Harvard University, US