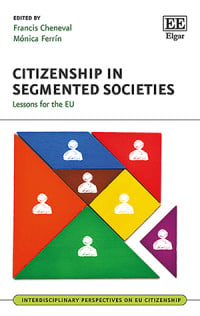 Lessons for the EU

9781788112680 Edward Elgar Publishing
Interdisciplinary Perspectives on EU Citizenship series
Edited by Francis Cheneval, University of Zurich, Switzerland and Mónica Ferrín, Collegio Carlo Alberto, Turin, Italy
Publication Date: 2018 ISBN: 978 1 78811 268 0 Extent: 224 pp
European Union citizenship is increasingly relevant in the context of both the refugee crisis and Brexit, yet the issue of citizenship is neither new nor unique to the EU. Using historical, political and sociological perspectives, the authors explore varied experiences of combining multiple identities into a single sense of citizenship. Cases are taken from Canada, Croatia, Czech Republic, Estonia, Spain, Switzerland and Turkey. These examples of communities being successfully incorporated into one entity are exceptionally useful for addressing the challenges facing the EU today.

Cases are taken from Canada, Croatia, Czechia, Estonia, Spain, Switzerland and Turkey to assess the various experiences of communities being incorporated into one entity. The studies show that the EU has a comparatively large degree of diversity and complexity, with levels of integration achieved in a relatively short timeframe. Advisory models based on Canada and Switzerland allow for the EU integration processes to continue while protecting diversity and upholding common institutions.

Citizenship in Segmented Societies will appeal to academics and students in the field of European and federalist studies with a focus on multiculturalism and linguistic pluralism, minority rights, and citizenship issues. It will also be of interest to those with a particular interest in historical and comparative analysis of the EU.
Critical Acclaim
‘How to build supranational citizenship while accommodating diversity and protecting existing communities is a key challenge to European integration. Case by case, this highly informative collection shows that that the EU is not alone – and that there is a huge variety of models to draw from (or to avoid).’
– Frank Schimmelfennig, ETH Zürich, Switzerland
Contributors
Contributors: A.C. Bianculli, F. Cheneval, Ç. Erdoğan, M. Ferrín, V. Hloušek, J. Jordana, S. Lopez, M. Sanjaume-Calvet, G. Tavits, C.I.V. Rico, H. Yılmaz

1. Switzerland as a Model for the EU
Francis Cheneval and Mónica Ferrín

4. The Czech Republic: Minority Rights since the Days of the Habsburg Empire
Vít Hloušek

7. Accommodating Rivalling Claims to Citizenship in Federations: Lessons for the EU
Marc Sanjaume-Calvet