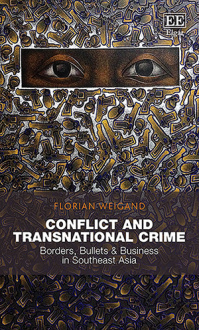 Exploring the links between armed conflict and transnational crime, Florian Weigand builds on in-depth empirical research into some of Southeast Asia’s murkiest borders. The disparate voices of drug traffickers, rebel fighters, government officials and victims of armed conflict are heard in Conflict and Transnational Crime, exploring perspectives that have been previously disregarded in understanding the field.

More Information
Critical Acclaim
Contents
More Information
Exploring the links between armed conflict and transnational crime, Florian Weigand builds on in-depth empirical research into some of Southeast Asia’s murkiest borders. The disparate voices of drug traffickers, rebel fighters, government officials and victims of armed conflict are heard in Conflict and Transnational Crime, exploring perspectives that have been previously disregarded in understanding the field.

Weigand’s nuanced comparative analysis of four border regions in Southeast Asia counters the stereotypical view that conflict zones are lawless areas in which all kinds of criminal activities flourish. Chapters illustrate the logic that determines the relationship between armed conflict and transnational crime. Further, the book analyses how smuggling economies function in conflict zones, explaining why some rebel groups are involved in the smuggling economy more than others, and why state actors actually play a much more crucial role.

This crucial study will be a compelling read for international relations, political sociology and development studies scholars. The in-depth analysis of real-life situations will also greatly benefit policy-makers and aid organisations looking to better support areas at the heart of conflict and transnational crime.

Critical Acclaim
‘In this engaged and open-minded study, Florian Weigand does us all a favor by exposing how shaky assumptions about the crime conflict nexus are.’
– Neil Boister, Criminal Law and Criminal Justice Books

‘Conflict and Transnational Crime is a cogent and compelling study of both the connections and disconnections between crime and conflict in Southeast Asia. It forcefully carves through the standard rhetoric of 'narco-terrorists' and 'militia-mafias' to offer a vital dissection of state involvement in illicit markets. In doing so, it laudably manages to instigate conclusions with global implications while remaining firmly tethered to its regional context.’
– Alessandro Ford, LSE Review of Books

‘An engaging and readable account of how state actors, armed militias and criminal groups operate in concert to control the political economy of trafficking, extortion and illicit markets that underpins much of the conflict violence in the borderlands of in Southeast Asia.’
– Keith Krause, Graduate Institute, Switzerland

‘This book provides a rare inside look at the links between armed conflict and transnational crime in the borderlands of Southeast Asia. Moving at a thrilling pace from Thailand to Myanmar and the Philippines, it challenges received wisdom on how conflict and crime are linked, in particular by putting emphasis on the role of state actors in smuggling networks. Well researched and engagingly written, it will prove an excellent resource for a wide range of readers interested in smuggling, conflict and borders.’
– Ruben Andersson, University of Oxford, UK

‘Digging beneath sensationalistic headlines and simple catch-phrases such as “the crime-conflict nexus,” “ungoverned spaces,” and “conflict commodities,” Florian Weigand has given us a timely, nuanced, and sophisticated account of the complex relationship between illicit trade and conflict in contemporary Southeast Asia. The book will be of great interest well beyond regional specialists.’
– Peter Andreas, Brown University, US
Contents
Contents: 1. Introduction 2. Underground Struggle and Licence to Smuggle: The Thailand-Malaysia Border Region 3. Meth and Militias: The Myanmar-China Border Region 4. International Crisis and Instant Coffee: The Bangladesh-Myanmar Border Region 5. Rice and Ransoms: The Indonesia-Philippines-Malaysia Border Region 6. Conclusions References Index