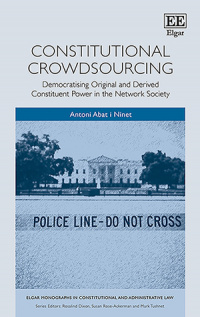 Democratising Original and Derived Constituent Power in the Network Society

9781786430502 Edward Elgar Publishing
Elgar Monographs in Constitutional and Administrative Law
Antoni Abat i Ninet, Visiting Professor of Constitutional Law and Legal Theory, Faculty of Law, Hebrew University of Jerusalem, Israel
Publication Date: 2021 ISBN: 978 1 78643 050 2 Extent: 192 pp
Conceptualising the new phenomenon of constitutional crowdsourcing, this incisive book examines democratic legitimacy, participation, and decision-making in constitutions and constitutionalism. It analyses how the wider population can be given a voice in constitution-making and in constitutional interpretation and control, thus promoting the exercise of original and derived constituent power.

Engaging and accessible, Constitutional Crowdsourcing will be of benefit to students and scholars of legal theory, constitutional and administrative law, political science and constitutions. Its forward-looking aspect will also appeal to public officers seeking a better understanding of the potential impact of constitutional crowdfunding.

Critical Acclaim
‘A fascinating meditation about the implications of the new technologically and digitally connected world we now all live in for such fundamental conceptions as the identity of “a singular ‘people’”in whose name sovereignty is claimed. At a more concrete level, should we welcome the genuine possibility that people connected to the modern internet could become the source of new constitutions and the legitimacy attached to them? Along the way, the author provides important discussions of the traditional animosity, in most political theory, to the demos, often described in terms of being a “mob,” or a “crowd,” resistant to the necessary leadership of wise elites. The tendencies identified by Professor Abat i Ninet are bound to be ever more important in the future, perhaps in ways we can scarcely envision at present.’
– Sanford V. Levinson, The University of Texas at Austin, US

‘Dare to get lost in this unmissable, erudite dive into the crowds present, past, and future – and their essential constitutional significance!’
– Dimitry Kochenov, Central European University

‘Through a theoretically and comparatively rich analysis, Antoni Abat i Ninet brings to the surface the radical democratic potential of constitutional crowdsourcing. This is a must read for both comparative constitutional lawyers and political theorists, as well as for anyone interested in constitution-making, constituent power, and popular participation in politics.’
– Joel Colón-Rios, Victoria University of Wellington, New Zealand

‘The rise of the Internet is revolutionizing the foundations of democratic politics with bewildering speed. Ninet rightly emphasizes the profound ways in which new technologies challenge traditional understandings of political identity – and calls on his readers to confront the unprecedented challenges required to reconstruct constitutional legitimacy in the brave new world of the twenty-first century.’
– Bruce Ackerman, Yale University, US
Contents
Contents: 1. Introduction to Constitutional Crowdsourcing 2. The crowd in democratic constitutionalism 3. The network society and democratic constitutionalism 4. Crowdsourcing and constitution-making 5. Crowdsourcing in constitutional interpretation and control Bibliography Index
Add to Wish List
eBook for individuals
978 1 78643 051 9
From £25.00
Click here for options
eBook for library purchase
978 1 78643 051 9
View sample chapter and check access on: