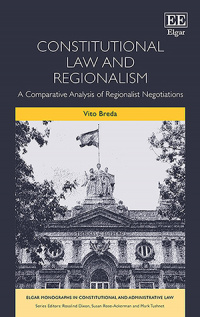 A Comparative Analysis of Regionalist Negotiations

9781783470129 Edward Elgar Publishing
Elgar Monographs in Constitutional and Administrative Law
Vito Breda, Senior Lecturer in Law, School of Law and Justice, University of Southern Queensland, Australia
Publication Date: 2018 ISBN: 978 1 78347 012 9 Extent: 304 pp
This topical book analyses the practice of negotiating constitutional demands by regional and dispersed national minorities in eight multinational systems. It considers the practices of cooperation and litigation between minority groups and central institutions in Australia, Britain, Canada, New Zealand, Italy, Spain, and the U.S. and includes an evaluation of the implications of the recent Catalan, Puerto Rican and Scottish referenda. Ultimately, the author shows that a flexible constitution combined with a versatile constitutional jurisprudence tends to foster institutional cooperation and the recognition of the pluralistic nature of modern states

More Information
Critical Acclaim
Contents
More Information
Constitutions and their systems are increasingly under pressure from identity groups such as regional and national minorities. Presenting the first comparative analysis of the negotiation of constitutional demands by these groups, Vito Breda uses an innovative methodology to create a richer understanding of the pluralistic nature of modern states.

Combining both political and constitutional analysis, Breda expertly analyses cases from the UK, Spain, Italy, Canada, the USA, New Zealand and Australia, reviewing the practices of cooperation and litigation between these groups and central institutions. An evaluation of the implications of the Catalonian, Puerto Rican and Scottish referenda show how regionalists seek to negotiate with central governments, defined by what they consider acceptable engagements under constitutional law. Both the systems and the constitutions themselves are changing under the pressure of these groups, but what remains is the distinctive constitutional structure ensuring that democratic agreements emerge from difficult negotiation processes.

Timely and in-depth, this book is a vital contribution to the discussion on constitutional law globally. It will also attract researchers interested in regional issues within law, political science and sociology, and particularly those who study the role of regional or nationalist movements inside democracies.

Critical Acclaim
‘Through a careful study of 7 cases, Breda shows how regions have been able to acquire powers of self-government through constitutional negotiations and the corresponding forms of democratic federalism these negotiations bring about in response. Required reading for anyone interested in democratic constitutional change in complex societies.’
– James Tully, University of Victoria, Canada

‘This is a must-read book for everyone studying current federalist issues. Dr Breda perfoms a holistic analysis on the most representative federal models, guiding the reader through the key questions: why a society decides to organize itself in a federal way and which are the main challenges that the “demos” and the “polity” are really facing.’
– Luis Gordillo, University of Deusto, Spain

‘Despite renewed interest among constitutional scholars in federalism and sub-state nationalism, the broader category of regionalism remains neglected. Vito Breda’s book promises to fill this gap. It brings an insightful cross-disciplinary approach to many of the main case studies, and draws out comprehensively the range of institutional approaches which contemporary constitutionalism brings to the accommodation of regions.’
– Stephen Tierney, University of Edinburgh, UK

Native Americans and the Supreme Court