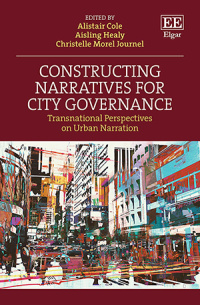 More Information
Contributors
Contents
More Information
Bringing together transnational perspectives on urban narration, this innovative book analyses how a combination of tales, images and discourses are used to brand, market and (re-)make cities, focusing on the actors behind this and the conflicts of power that arise in defining and governing city futures.

Reflecting theoretically on the role of storytelling in urban contexts, an international range of leading scholars analyse how the re-making of cities is governed. Undertaking detailed empirical case studies across France, Hong Kong, the UK and the US, chapters provide comparative perspectives on a broad range of urban narratives, including alternative narratives within and across cities. Cases examined include the smart city of Hong Kong, the multi-city economy of England’s Northern Powerhouse, and resistance and resilience in Lyon and Pittsburgh. Ultimately, this insightful book underlines the importance of urban narratives in the government and governance of cities.