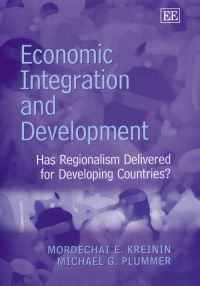 Has Regionalism Delivered for Developing Countries?

9781840647020 Edward Elgar Publishing
The late Mordechai E. Kreinin, formerly University Distinguished Professor of Economics, Michigan State University, Past President of the International Trade and Finance Association and author of 11 books and 200 professional articles; and Michael G. Plummer, Director, SAIS Europe, and Eni Professor of International Economics, Johns Hopkins University, Bologna, Italy
Publication Date: 2002 ISBN: 978 1 84064 702 0 Extent: 192 pp
Mordechai Kreinin and Michael Plummer consider the implications of the emerging global trend of economic regionalism for developing countries. The analysis focuses on the trade and investment effects of integration in developed countries on developing countries, as well as the ramifications of regional integration in the latter. After an extensive review of the theoretical and empirical literature pertinent to the economics of regionalism, the book considers the ex-post trade and direct-foreign-investment effects of the Single Market Program in Europe and NAFTA, followed by chapters on ASEAN and economic integration in Latin America, primarily MERCOSUR.

Economists and policy scholars, as well as readers interested in regionalism and economic development, will find this book a great resource.
Critical Acclaim
‘The intriguing and provocative results on the effects of the single European market and NAFTA make this short book worth a read, even if one is concerned only with how developing countries have been affected by regional trade agreements that do not include them.’
– Peter J. Montiel, Journal of Regional Science

‘This book is an excellent attempt to pin down the effects of regional economic integration on developing countries. . . it will prove to be a good guide for researchers and students of development economics working in the area of regional trading arrangements, and policymakers and governments which are in the process of exploring the possibilities of forming free trade areas.’
– Pravakar Sahoo, Development Policy Review

‘Students interested in either the methodological issues inherent in research on trade or on the economics of trading blocs in general would profit from the book.’
– James J. Hentz, The European Journal of Development Research
Contents
Contents: 1. Introduction and Summary 2. The Theory of Preferential Trading Arrangements: An Overview 3. Measuring the Effects of Economic Integration 4. Effect of EC-92 and NAFTA on Developing-Country Trade Flows 5. Effects of EC-92 and NAFTA on DFI in Asia 6. ASEAN Economic Cooperation: Real and Monetary 7. Anticipatory Effects of Regional Integration: The Case of ASEAN 8. Economic Integration in MERCOSUR and the Americas Bibliography Index
Add to Wish List
eBook for individuals
978 1 84376 718 3
From £25.00
Click here for options
eBook for library purchase
978 1 84376 718 3
View sample chapter and check access on: