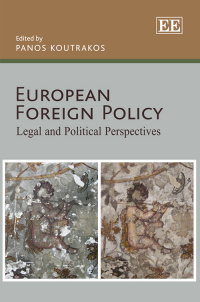 • how the EU’s judges understand its relationship with the international order;
• the coherence of the Union’s external action;
• the EU’s approach to its neighbours;
• the Common Security and Defence Policy; and,
• the EU’s participation in international organisations.

More Information
Critical Acclaim
Contributors
Contents
More Information
Written by leading experts, this book focuses on central issues of the foreign policy of the European Union. The issues explored include:

• how the EU’s judges understand its relationship with the international order;
• the coherence of the Union’s external action;
• the EU’s approach to its neighbours;
• the Common Security and Defence Policy; and,
• the EU’s participation in international organisations.

By addressing each topic from a legal, political science and international relations standpoint, this relevant book highlights the different perspectives that these disciplines bring to the central issues of the EU’s foreign affairs, and starts a conversation between the respective communities.

‘This is not just another book on the external action of the European Union. It is a worthy attempt to overcome a division in academic literature between political science and legal approaches to the subject. . . this work is the result of a well-considered and successful exercise to bridge the gap between law and political science. The structure of the book, the quality of the contributions and the detailed index make it recommended literature for everybody who is interested in the foreign policy of the European Union.’
– Peter Van Elsuwege, Common Market Law Review

‘. . . with regard to the subject matter, this volume is an encouraging attestation of the fact that EU foreign policy, even though at times appearing woolly and inert, is moving forward across the board. With regard to scholarship, it demonstrates, in an equally encouraging manner, that the “cohabitation” of law and political science/international relations does not have to result in “a house divided”.’
– Joris Larik, European Foreign Affairs Review

‘Like early mariners, politicians and officials trying to navigate European foreign policy find themselves in an environment of unpredictable hazards – hidden institutional shoals, and legal reefs that can tear the bottom out of a policy. This insightful collection of contrasted studies shines the twin beams of political science and legal analysis into these opaque depths. Practitioners as well as scholars will benefit from the illumination.’
– Nick Witney, European Council on Foreign Relations and Former Chief Executive of the European Defence Agency, UK

‘This collection on EU foreign policy is an attractive one for several reasons: it contains a very nice set of essays on a topic which has loomed large on the European Union agenda for some years, namely the international role of the EU. The chapters are written by a range of interesting and eminent scholars in the field. Most importantly in terms of its distinctive contribution, the book brings together perspectives from law and from political science. This is done in part by including chapters by authors from different disciplines but also by choosing cross-pillar themes and topics such as the European Neighbourhood Policy, EU policy on Kosovo, security and defence policy, as well as more general cross-cutting themes like the idea of “coherence”, the position of the EU within international organizations, and the approach of the EU to the international legal order. Each of the individual chapters is well worth reading, and the book as a whole is a useful and interesting contribution to the existing literature.’
– Gráinne de Búrca, Harvard Law School, US
Contributors
Contributors: A. Çollaku, M. Cremona, S. Duke, K.E. Jørgensen, A. Kalaja, S. Keukeleire, J. Klabbers, P. Koutrakos, A. Skordas, B. Van Vooren, M. Webber, R.A. Wessel
Contents
Contents:

PART I: COHERENCE IN EUROPEAN UNION FOREIGN POLICY
1. Consistency, Coherence and European Union External Action: The Path to Lisbon and Beyond
Simon Duke

4. Völkerrechtsfreundlichkeit as Comity and the Disquiet of Neoformalism: A Response to Jan Klabbers
Achilles Skordas

PART III: THE EUROPEAN UNION AND ITS NEIGHBOURS
5. The European Union as an International Actor and Progressive Experimentation in its Neighbourhood
Bart Van Vooren

8. The Role of Law in Common Security and Defence Policy: Functions, Limitations and Perceptions
Panos Koutrakos

PART V: THE EUROPEAN UNION IN INTERNATIONAL ORGANIZATIONS
9. The Position of the European Union in (Other) International Organizations: Confronting Legal and Political Approaches
Knud Erik Jørgensen and Ramses A. Wessel