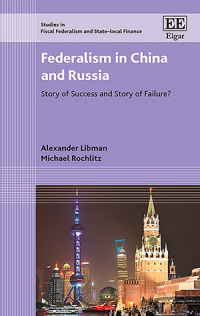 Federalism in China and Russia

Story of Success and Story of Failure?

More Information
Critical Acclaim
Contents
More Information
Based on the synthesis of a large empirical and theoretical literature on center-region relations in China and Russia, Federalism in China and Russia is one of the first attempts to integrate this literature from different disciplines into a coherent common framework. Libman and Rochlitz argue that the divergence in growth performance between Russia and China can be – at least partially – explained by a number of features of the Chinese system of center-regional relations.

The authors offer a comparative analysis of the development of center-region relations in Russia and in China and explore several dimensions of these relations: fiscal ties and incentives; bureaucratic practices; flows of information; and local government practices, while addressing the determinants of divergence between both countries. They also examine how the Chinese system has recently started to change, by adopting several features of the Russian model, which might be one of the reasons for China’s declining growth performance in recent years.

Federalism in China and Russia should be read by scholars in public economics, political economy and comparative politics, as well as by students and policy analysts. For scholars, the book serves as a point of reference in studying the comparative evolution of the two countries. It will enrich the discussion on fiscal federalism, center-region relations and sub-national political regimes, and could potentially become an important part of syllabi in political economy, public economics and comparative politics courses. For policy analysts, the book offers a comprehensive survey of the evolution of center-periphery relations of the two countries and the differences between them, which is important to better understand the overall development of Russia and China.

Critical Acclaim
‘The book is a well-written comparison of fiscal federalism in China and Russia that is accessible to specialists and non-specialists alike. It will be of particular interest to scholars and students of comparative politics, political economy, and authoritarianism, as well as those focusing on center-local relations in China and Russia.’
– Elizabeth Plantan, The Russian Review

‘Federalism in China and Russia. Story of Success and Story of Failure? is a valuable contribution to the literature on fiscal federalism, multi-level politics and comparative politics. It is essential reading for students of political economy, public policy, comparative federalism, and for everyone interested in centre–region relations in China and Russia.’
– Ekaterina Paustyan, Europe-Asia Studies

‘Alexander Libman and Michael Rochlitz provide an important analysis of why some Chinese regional, county, city, township and village governments have generated economic success allowing China’s economy to grow at remarkable rates for more than three decades. In comparison, Russia managed significant growth only during the period of high oil prices (2000-08). With Vladimir Putin’s hyper-centralization, most Russian regions have been stifled and stymied rather than supported. The authors describe how China managed to generate an institutional system supporting a successful decentralized economy, while noting that China’s solution is far from perfect and its stability is not guaranteed.’
– Harley Balzer, Professor Emeritus, Georgetown University, US
Contents
Contents: 1. Introduction 2. Fiscal federalism 3. Bureaucratic incentives 4. Information, monitoring and control 5. The local state 6. Logic of divergence 7. Conclusion References Index