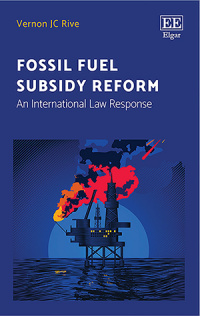 More Information
Critical Acclaim
Contents
More Information
Fossil fuel consumption is an increasingly volatile issue, and its subsidisation continues to be challenged by lobbyists and activists. This timely book provides an empirically-grounded and theoretically-informed account of international law sources, mechanisms, initiatives and institutions relevant to the practice of subsidising fossil fuel consumption and production.

This book offers a wide-ranging analysis and critique of polycentric international responses to environmentally harmful fossil fuel subsidies. Drawing on interviews with officers and representatives of a wide range of institutions involved in subsidy reform, as well a broad range of cabinet papers and diplomatic correspondence, Vernon Rive dissects and maps the activities of the international legal and governance framework relevant to fossil fuel subsidy reform. Featuring sustained and comprehensive analysis throughout, the book considers the existing WTO framework’s potential to legally challenge fossil fuel subsidy practices.

This engaging book will be indispensable to researchers in law with a particular interest in the frameworks that underpin and challenge fossil fuel subsidies. Furthermore, it will provide critical insight for legal practitioners and policymakers operating in international trade and environment policy, as well as wider global climate change networks.